More than 700 people jammed the hall at the University of Minnesota to present Kenneth Feinberg with their overwhelming opposition to proposed pension cuts. 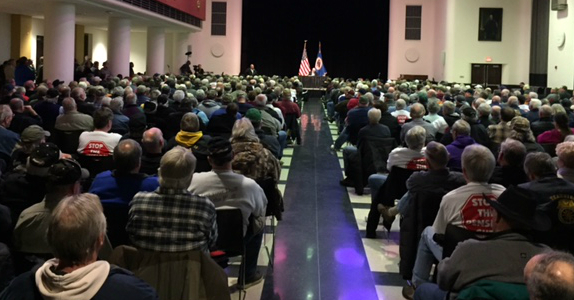 Retired and active Teamsters were joined by many spouses and family members. Speaker after speaker spoke out against the proposed reduction of hard-earned benefits. Over a hundred attendees wore colorful t-shirts sporting a stop sign reading: “Stop the Pension Cuts.”

Feinberg is the Special Master appointed by the U.S. Treasury Dept. to oversee the evaluation of the so-called "Plan Reduction" submitted by the Central States Pension Fund.

The solid turnout can be attributed to the more than year-long efforts of the Minnesota Committee to Protect Pensions and the assistance they were given by Teamsters Local 120. The local chartered buses to transport Teamsters from the union hall to the event. Teamsters from as far off as Fargo, North Dakota attended the town hall meeting.