More than 100 retirees gathered outside two UPS terminals Thursday to protest a company plan to cut their pensions by 20 percent. Many are calling it the latest attack on the Central States Teamster Pension Plan. 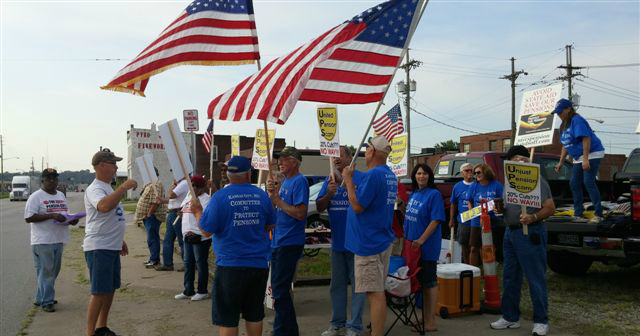 There are 32,000 workers in Missouri alone who are vested in this pension plan. And protesters claim they all would feel the pain, arguing that if UPS can cut pension payments by 20 percent, other employers will follow.

"I think the pension plans are probably a dinosaur," said Cynthia McDaniel, wife of a retired Teamster freight driver. "They are wanting to get away from that. I have no issue with that. I have an issue with them throwing the people who have worked 30 or 40 years hard, hard labor. They are wanting to throw them under the bus and cut their pension plans and not deal with it."

The workers say cutting retirement income that many have earned after 30 or 40 years of labor will ripple throughout the region's economy, with less money spent at local businesses.

And retirees claim the proposed cuts are no guarantee for solving the pension crisis.

Wes Epperson drove a truck for UPS for nearly 44 years and says there are other proposed solutions that don't include cutting payments to workers.

"I don’t hoard money like billionaires," Epperson said. "We spend it. We put it into the economy. So it’s not going to be just us. It’s going to be all the small business people that we spend our money where we live."

Many retirees blame Wall Street for mismanaging their pension during the financial crisis of 2008, when the Central States Fund lost 40 percent of it's value.

Now that big banks are making billions again, retirees want the fines Wall Street firms have paid for their wrongdoing to be plowed back into pension funds.

Retirees say since Congress enacted the Multi-Employer Pension Reform Act, there have been attempts to include pension cuts to budget bills without any debate. The protesters want Congress to do it's job to enact a solution that doesn't fall entirely on the backs of workers.

Glenn A. Zaccara, a representative for UPS, issued the following statement:

"The potential failure of multiemployer pension plans is a national issue UPS did not create. UPS is working to be part of the solution by proposing a plan that has the potential to stop the failure of approximately 100 critical or declining pension plans across many industries, covering an estimated one million current and future retirees, including many UPS retirees."