Movement to Save Pension Grows

The movement to head off pension cuts and protect Teamster pensions continues to grow, even as the Central States Fund plans to announce their intention to slash earned pensions. 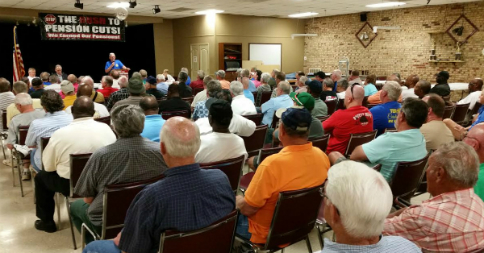 The latest committee to form is the Missouri - Kansas City Committee to Protect Pensions, which is building support for the Keep Our Pension Promises Act. Over 100 retirees and Teamsters packed their first meeting on July 6.

Here is a partial list of upcoming meetings where you can get informed and involved. If you are in another area, contact us and we will tell you what’s being organized in your area. Committees have formed in most states in the Central and Southern areas, and all have Facebook pages.

All the various pension committees are contacting and visiting the staffs of Senators and Congressional Representatives, as well as demanding that the Central States Fund delay their plan to try to cut pensions.  All committees are open to working Teamsters, as well as retirees and spouses.

A plan is in the works for a Rally and Lobby Day in Washington DC. Details should be announced soon. To stay informed, get in touch.

Teamster President James Hoffa has come out in favor of the Promises Act, but so far has done little to put Teamster muscle behind it, and has not used his influence to get the Central States Trustees to shift course and support the Promises Act.