Bill Slater passed away two days ago at the age of 93 in Lakeport, California. Bill was my good friend for 40 years. 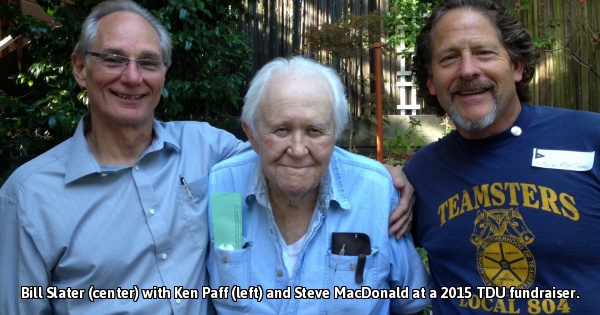 I’m sad to think of his passing, but so happy to have known him. I smile as I think of the laughs and talks and struggles we had together.

Many people in the Teamsters and in the labor movement would say the same thing, because Bill touched so many people.

Bill was a WWII Navy veteran. Until recently, he attended annual ship reunions and kept in touch with other vets of the war in the Pacific. After the war, Bill became a unionist for life.

The first time Bill gave a speech at a Convention of Teamsters for a Democratic Union was around 1980. He spoke about ordinary folks, and what so-called “reasonable” corporate people can so heartlessly do to them. It was about Bill’s mother. I recall it well after nearly 40 years.

Bill joined TDU in 1978 when he heard of our movement from his friend John Torbet. And he jumped right in, recruiting fellow carhaulers in California and beyond to TDU. He was soon elected Vice President of Local 468 in Oakland, but Bill didn’t go after union offices or positions. His goals were higher: not only transforming our union, but making this country into a place where poor and working people are treated fairly and decently.

Bill served on our national steering committee and helped in every way he could.

Bill was never quiet about his views. Once I took Bill on a guided rafting trip down the Grand Canyon. I knew he wanted to do something like that, so I just set it up and said meet me in Flagstaff, Ariz. But I was nervous about how this would go—being with a bunch of strangers for nine days, listening to Bill’s unfiltered opinions. But the thing is, even when Bill expressed himself about injustice or phony politicians, he did it in a way that everyone could relate to. He became the social center of the group.

It was impossible not to like Bill.  He spread love and solidarity far and wide.

Bill was involved in every important victory our movement achieved; he was especially proud of helping elect Ron Carey as Teamster president in 1991. And he was involved in our set-backs, too. He understood better than most of us that the struggle for justice is a marathon.

Bill is survived by his daughter Leslie and her husband Tim, who were Bill’s next door neighbors and best friends and who lovingly looked after him. And he is survived by so many of us across the country who loved him.

I miss Bill and am proud to have called him my friend.