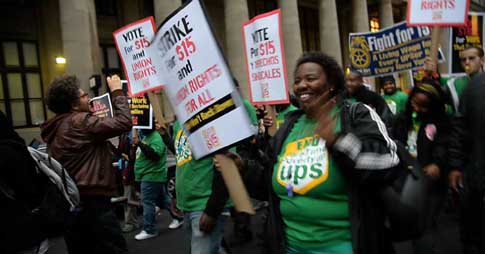 The Fight for $15 victory in New York will deliver higher pay for UPS part-timers in New York City and wage increases to three million workers statewide.

“By Fighting for $15, part-timers in NYC won from the legislature what Hoffa and Hall wouldn’t fight for in our contract,” said Dave Loobie, a UPS part-timer and End Part-Time Poverty at UPS Campaign activist. “But we’ve still got a long way to go. Even in New York this agreement leaves many part-timers behind."

"The work we do at UPS is not minimum wage work. But Hoffa and Hall have turned our jobs into minimum wage jobs," Loobie said.

But UPS part-timers in Local 804 who work in Long Island and Westchester fall under different rules. The minimum wage in their counties will be just $11 an hour when the contract expires—and won’t reach $15 until 2021.

The minimum wage in other areas of the state will rise to $15 an hour on an even slower timeline.

UPS made $4.5 billion in profits and its CEO doubled his pay to $8.4 million in 2013; that same year the Hoffa-Hall administration agreed to freeze starting pay for part-timers at $10 an hour through 2018.

Local 804 members held rallies outside UPS buildings and collected signatures in support of a $15 minimum wage. They marched through New York City streets and they rallied in the state Capital.

On April 1, New York joined California as the first states to adopt a statewide minimum wage of $15 an hour.

The End Part-Time Poverty at UPS Campaign will continue. We are joining a Fight for $15 national Day of Action on April 14. We will continue to fight for living wages for every UPS part-timer, every Teamster and every worker. 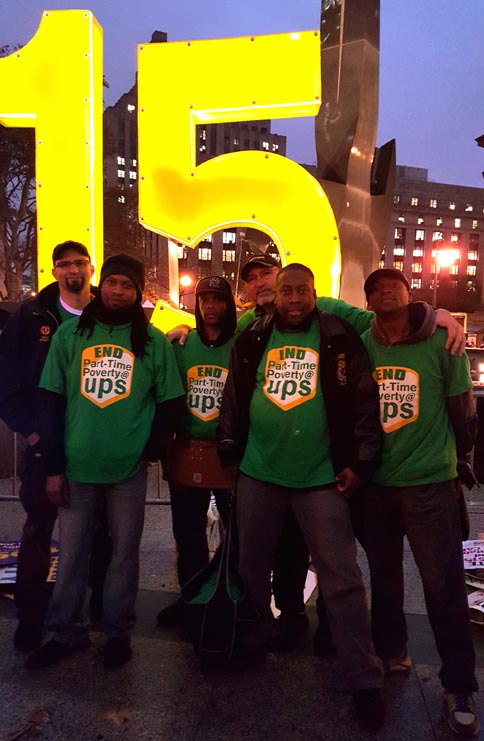