Use the Knowledge
“For 27 years, the $100,000 Club has given members the facts and Teamsters have responded by demanding reforms. TDU and the $100,000 Club have reduced dues waste and freed up millions to spend on union power. History proves it. Now let's finish the job.”
Michael Savwoir, UPS
Local 41, Kansas City, MO 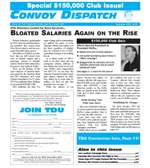 How the $100,000 Club and TDU Have Changed Teamster History
TDU began publishing the "$100,000 Club" in 1979. Armed with this information, and the Right to Vote, Teamsters have demanded financial reforms and won them. Read more.

Teamster Spending by the Numbers
How much money's been collected under the 2002 dues increase? How many Big Macs can an International Rep buy with their daily meal allowance?

Click here for more facts and figures on Teamster spending.

One Salary is Plenty
“When officials give themselves big multiple salaries, they forget where they come from and can’t relate to the rank and file. That’s where I disagree with them. I always took only salary, just like the members.”
T.C. Bundrant, Retired President
Local 549, Kingsport, Tenn.

$150,000 Club: What’s Your Opinion?
The TDU Steering Committee is considering in the future printing salaries of only those officials who make over $150,000, the limit that Hoffa himself had in his platform when he ran for Teamster president.

What do you think? We are seeking the opinions and input of all Teamsters.

When TDU began researching Teamster finances to keep members informed, 27 years ago, $100,000 was a fat cat salary. Today, the full listing allows Teamster members to compare for themselves their own local union salaries against others, and to decide what is fair compensation for union officers.