June 18, 2009: The assault on Local 82 members and their seniority rights continues. 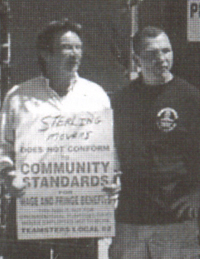 John Perry is at it again. The principal officer of Boston Local 82 and the director of the International Union’s Trade Show Division has forced through another contract that guts the seniority rights of Boston trade show Teamsters, this time at Champion Exposition Services.

Critics charge that Perry is violating members’ seniority rights in order to funnel trade show jobs to a group of thugs with violent criminal records. In turn, the thugs provide Perry with muscle to control Local 82.

Perry is headed to court on July 22 for a hearing on charges that he assaulted a Teamster who filed a grievance to enforce members’ seniority rights. Local 82 enforcer Joseph “JoJo” Burhoe will face charges the same day for brutally assaulting a Local 82 member who criticized Perry.

The full story about Perry and his Boston Goon Squad were previously reported by TDU in Thugs Run Amok in Local 82 and in the Boston Herald.

Perry is already under investigation by the Independent Review Board, the panel set up to investigate Teamster corruption. But that hasn’t slowed down his attack on members’ seniority rights.

Last month, Local 82 Teamsters at Champion voted to reject a proposed contract because it eliminated strong language that makes sure that senior employees don’t get passed over for work.

Instead of negotiating a new agreement that includes the seniority protections, Perry held a second vote on the same deal under circumstances that guaranteed the results Perry wanted.

Perry conducted his re-vote at an employer facility and played pick and choose with the balloting. Some supervisory personnel were given the green light to vote on the contract while other Local 82 members who work for Champion were denied their right to vote.

Perry’s Vote Till You Get It Right tactics worked and his contract passed. Members are challenging the vote and preparing internal union charges. Perry already faces internal union charges for negotiating a trade show agreement that gutted the seniority language at another company without even holding a proposal meeting.

In the meantime, Perry is now preparing to move against the seniority rights of Local 82 members at another trade show employer Freeman Decorating Company.

As an IBT Division Director, Perry is supposed to coordinate our union’s efforts to defend members’ rights in the Trade Show industry—including seniority.

The “problem for Perry is that enforcing seniority rights would make it impossible for him to put his enforcers and friends to work while long-time Local 82 members sit at home. That’s why Perry has refused to process seniority grievances and is now moving to eliminate the language all together.

The Hoffa administration is more interested in protecting their political appointee, Perry, than in protecting Local 82 members and their rights. But the scandal has gone too far. Anti-union forces who would love to take advantage of this scandal to weaken Teamster members’ rights in the Boston trade show industry.

Media stories on Perry’s goon squad make it sound like all Local 82 trade show Teamsters are dangerous criminals who pose a threat to the public.

To try to defend himself, Perry has told the media, “What’s wrong with trying to provide jobs” to people with criminal records?

The answer is: nothing. The problem in the Boston trade show industry is not anyone’s past criminal record, but the criminal behavior that is happening right now—including Perry’s.

The goon tactics need to stop. Seniority needs to be maintained in Local 82 contracts. And members’ rights to a voice in bargaining and fair contract votes must be enforced.

None of this will happen while John Perry and his crew remain in power in Local 82. The International Union needs to act now.