January 3, 2011: What should TDU be doing in 2011? We asked Frank Halstead, a co-chair of TDU’s International Steering Committee, the leadership body that was elected at the TDU Convention in November. 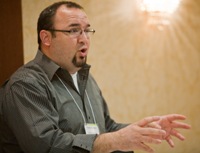 Hoffa and his administration have failed Teamsters in every possible way. They’re failing at the bargaining table. And then they’re failing to enforce the weak deals they negotiate.

TDU is the only organized group that members can seek help from when the leadership is failing them.

Voice: What is TDU’s job this year?

Change looks like active, informed members participating in their union. Fighting for better contracts. Enforcing the contracts they work under. Organizing nonunion workers. Being directly involved in all levels of our union.

TDU has the tools to help members get involved and make this change real. But many members aren’t aware of TDU’s existence, or they don’t know how helpful TDU can be.

Our job this year is to go out and talk to these members, listen to their issues, and help them get involved in our movement.

We’re doing that right now in Southern California, where our TDU chapter is sponsoring a new series of workshops in Spanish on legal rights in the union and writing and presenting grievances.

Voice: What will it take to win the election and get rid of Hoffa?

During the petition campaign, I heard more than ever before Teamsters saying that we need change.

If we’re going to win, we need to turn those feelings into action and organization. It’s going to take a grassroots army, going member to member and building support for Sandy.

That’s what TDU does best.

TDU can’t do it all on our own. We need to build big alliances and reach out to all Teamsters who see that we need new leadership.

But TDU gives us the tools to go out there and get the job done.

If we want to win this election, and get the good quality leadership we all deserve, then we need to talk to members about TDU and ask them to join.