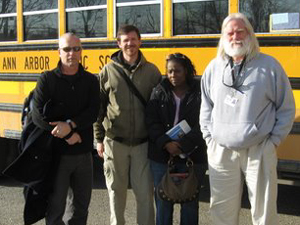 Ann Arbor bus drivers reached out to the community and voted No to stop privatization and steep cuts.Here’s what happened when members called their bluff.

In Ann Arbor, Mich., Teamster bus drivers and monitors in Local 214 have been working under an extended contract since July 1, 2008.

Talks are in mediation and have been progressing at a slow pace. But this March, the situation heated up. Board of Ed administrators told the union that if they did not take cuts of $800,000, they would privatize the service to get those savings.

First Student and Durham School Services were at the ready to take over the transportation operation.

The board proposed a 10 percent pay cut, and increased healthcare payments.

Members took action and reached out to the community. “The custodians were also being threatened with privatization, and when they started picketing Board of Education meetings, we got a flyer together and joined them” said Chai Montgomery, Teamsters 214 unit steward.

“When we got the word out to the community about how dangerously these companies operate, parents, teachers and coworkers came out to support us by speaking at Board of Education meetings,” said Montgomery. “We didn’t wait for local officials to act, because we’d still be waiting if we had—we did it independently.”

Members voted down the concession proposal 98 to 31.

The No vote sent a strong message back to school administrators. At the bi-weekly Board of Education meeting the following day, the superintendent did not include privatization as part of his proposed budget recommendation to the board. “We called their bluff, and we kept 10 percent of our wages,” said Montgomery.

The solid opposition to the proposed cuts and threat of privatization shows Teamster members are ready to defend their contract and expect much more from bargaining.

“They were using strong-arm tactics,” said Richard Miller, a bus driver who spoke out at several Board of Education meetings and helped organize his coworkers. “But we stuck up for ourselves and we aren’t going to let up now.”

Local 214 drivers and monitors are going back to the bargaining table hoping to preserve their wages and benefits and stop the disproportionate concession demands.