April 15, 2015: The Central States Pension Fund has launched a PR offensive to sell their fast-track pension cut plan as the only way to “rescue” members’ retirement. Teamster members and retirees are demanding a review by independent actuaries and consideration of alternative proposals before the cuts are imposed. 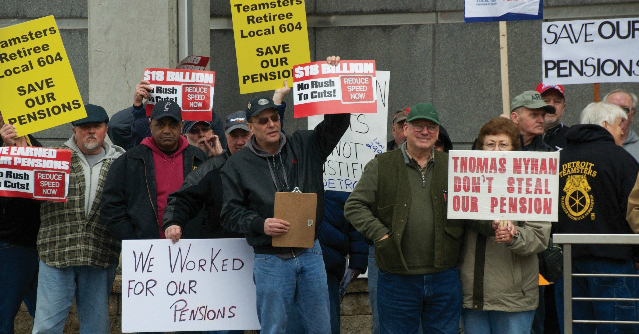 Central States Director Thomas Nyhan pitched his plan in a letter and national conference call, calling for deep cuts on a fast track with no amendments permitted.

“Nyhan said that some will tell you that there are easier solutions, but there are not. He's right, that's the easiest way --just cut pensions!” said Mike Walden, chair of the Northeast Ohio Committee to Protect Pensions. “We need a real look at all the alternatives.”

Teamster members and retirees are calling for an independent review of the fund that evaluates possible alternatives to Nyhan’s pension demolition plan.

Why is an independent review necessary?

Even if you have a good doctor, it’s wise to get a second opinion before undertaking a serious operation. In this case, the pensions of 400,000 Teamsters and retirees are going under the knife.

Under the law, Teamsters are entitled to a retiree representative to the Fund to watchdog for their interests during the pension cut process. But Central States appointed Sue Mauren to be the fund’s retiree representative—a retired official with multiple pensions and close ties to the Hoffa administration. That doesn’t cut it.

Is there really time for an independent review? Nyhan says there is no time to delay.

Of course, decisive action is required: the fund is in trouble. But the numbers do not justify a rush to judgement—not when the retirement of 400,000 Teamsters who earned their pensions is on the line.

The Fund is not on the brink of bankruptcy. Its assets have actually grown over the past six years. The Fund had $18 billion in assets on September 30, compared to $17.3 billion at the end of 2008 when Wall Street crashed the economy.

Nyhan claims the Fund will go broke in 11 years—but these charts, based on assumptions used by the fund, show that it would actually be closer to 17 years. We cannot allow Central States to go broke at any time, but it is more evidence of why a full review by independent actuaries is needed.

What is Hoffa doing to protect our pensions?

Hoffa was not on the call, nor were any International Union officers. Vice President John Murphy showed up at the Save Our Pensions rally to glad hand the crowd and told people he was “sent by the General President to support what they are doing” and that Hoffa will “fight for the repeal” of the MRPA pension cut law.

If that’s the case, why are Teamster Trustees and International Officers lining up in favor of the Central States cuts? Nyhan has repeatedly stated that all the trustees, including the Union Trustees, support his pension cut plan and his schedule which allows for no amendments.

What Can We Do?

We are building a united movement with AARP, other unions, the Pension Rights Center and public allies to support a pension relief bill that will soon be introduced in Congress.

We worked our whole lives for our pensions—now we are working together to defend them.