September 28, 2010: The Central States Pension Fund had $18 billion in assets as of June 30, 2010, according to their quarterly Financial and Analytical Report, which Teamsters for a Democratic Union obtained in late August. 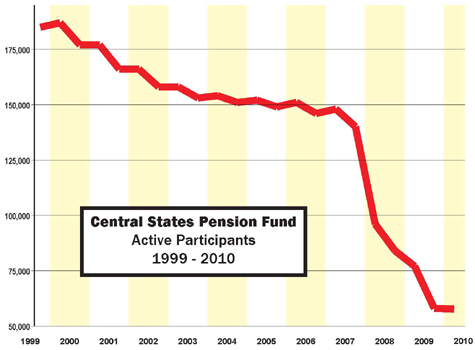 This is down from $19.5 billion at the beginning of the year. The loss is due to two factors: the poor stock market performance in the second quarter, and the temporary withdrawal of YRCW, the fund’s largest participating employer.

The fund lost 6.8 percent on its investments in the second quarter. The Central States Fund is more heavily invested in stock (67 percent of assets) than most other pension funds. The stock market has headed upward in the third quarter, and that may be reflected in the next report.

As reported by Teamsters for a Democratic Union last quarter, Goldman Sachs resigned as asset manager, effective Aug. 2. The fund transferred the assets formerly managed by Goldman Sachs to Northern Trust, and some of it to passive investment (index funds).

George Westley, who long ago retired as head of New Orleans Local 270, was reappointed for another five years as a union trustee. These union appointments appear to be for life.

This graph shows the decline in the participants in the fund during the 11-year reign of James Hoffa as Teamster President.

The number of participants dropped sharply in December 2007, when Hoffa let UPS pull 44,000 Teamsters out of the fund.

During Hoffa’s tenure, an additional 83,000 members were lost.

Some 12,000 were lost due to the temporary withdrawal of YRC.

The number of retirees has remained steady at around 214,000 for the past seven years.

The Fund’s quarterly Independent Special Counsel Report devotes three pages to the critical issue of YRCW’s participation, but provides no guidance or new information on the topic.

The reports do not indicate that any changes in benefits are planned. Like all pension funds that are in the “red zone,” Central States will produce an updated 2010 rehabilitation plan.

A copy of the Central States Financial and Analytic Information is available here.

An additional report from the Special Counsel to the fund is also available here.