January 23, 2013: The employers are stepping up their attacks on union jobs.

Members say it's time to start fighting back.

Teamster dairy workers in New York City have fought for years against company cost-cutting, growing nonunion competition and weakening contract protections. The employers are stepping up their attacks on union jobs. Members say it’s time to start fighting back.

Nearly 200 members of New York City Local 584 who worked at Beyer Farms were laid off without warning on Dec. 11 when the company suddenly announced it was shutting its doors. These members join the 42 other Local 584 members who were illegally fired by Elmhurst Dairy in late September.

The union has filed a grievance and NLRB charges against the firings at Elmhurst Dairy, and a few of the "Elmhurst 42" have been called back.

Beyer Farms may have closed, but the work itself—including major accounts with public schools and CVS, Duane Reade and other large grocery store chains—hasn't disappeared. Teamsters remain off the job, while the delivery routes are worked by new hires at other companies or nonunion competition.

"We have layoff and recall language in our contract with the dairy employers," says Local 584 member and Beyer Farms utility worker Stephen Mohan. "The companies shouldn't be able to just shuffle work around and ignore our seniority rights. We're asking the union's help to make sure this work stays union and that we get our jobs back."

Local 584 members have some real leverage to fight with too—the high-profile stores and customers on their delivery routes. "Walgreens doesn't want to see a crowd of Teamsters out front leafleting customers," explains Louis DeStasio, an alternate steward and 23-year Beyer Farms Teamster. "We should also be talking to customers, the community, members of other unions and elected officials about this attack on good paying jobs."

In a letter to employees the company stated that their primary milk supplier, Dean Foods, stopped supplying milk for Beyer to process and deliver. Dean Foods put a lien on Beyer's accounts. Beyer Farms claims that since these "circumstances were not reasonably foreseeable," they are not required to give the workers the 60 days notice required by the WARN Act.

Members report that two hours after Beyer Farms announced the closing, a number of sales and management personnel simply walked across the yard and brought their accounts to Elmhurst Dairy. Some of the work is being handled by a nonunion company in New Jersey that happens to be owned by the son of Elmhurst owner Henry Schwartz. 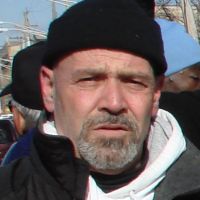 "Walgreens doesn't want to see a crowd of Teamsters out front leafleting customers.

"We should also be talking to customers, the community, members of other unions and elected officials about this attack on good paying jobs."