Does Hoffa want to Destroy the Central States Pension Fund?

April 24, 2015: The Hoffa administration is making a deal to let Kroger pull 7,000 Teamsters out of the Central States Pension Plan, and move them into a Kroger pension plan. Is Hoffa out to destroy the pension fund his father set-up, or does he just sign any deal the employer wants? 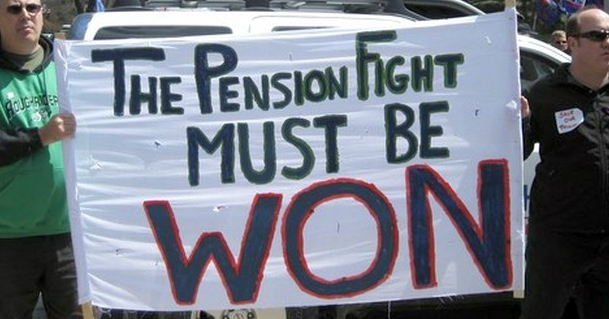 This disastrous move comes as the trustees of the Central States Plan are moving to cut the pensions of some 300,000 retirees and active Teamsters.

In early May the International union is going to vote a tentative agreement covering Kroger drivers and warehouse workers at distribution centers in Memphis, Houston, Wichita, and at dairies in Indianapolis and Detroit. The deal would pull the Teamsters out of the Teamster Central States Fund, and put them into a Kroger consolidated fund.

Even worse, the plan is to extend this disaster to Kroger’s five contractors who run warehouses and transportation in Cincinnati, Indianapolis, Louisville, Atlanta, and production facilities elsewhere.

How could this happen? Just two weeks ago at the big pension fund meeting in Chicago of local officers in the Central and Southern areas, the talk was to keep everyone in the plan: no more exit deals! But while that was being said, the Hoffa administration was cutting a deal with Kroger.

Reportedly officials of the Central States Fund are bitter and angry at this move by the International union. The Fund would get a withdrawal liability payment, reportedly in the range of $1 billion, but would lose a huge chunk of active participants. UPS paid $6 billion in withdrawal liability, but much of it was lost in the economic collapse, and now the fund suffers a loss of $800 million per year in missing UPS contributions.

The disastrous impact of the Hoffa-Hall deal to let UPS out of the plan doesn’t seem to have taught them anything. Their disregard for our members, retirees, and the future of our union is exceeded only by their willingness to give out corporate concessions.