July 21, 2009: Fed up with contract givebacks, benefit cuts & empty promises, members are launching a movement to elect new leaders and set a new course for our Teamsters Union.

As we go to press, 50,000 freight Teamsters at Yellow-Roadway Corp. (YRC) are voting on whether to accept the worst concessions in Teamster history.

If accepted, the givebacks will bring wage and benefit concessions at YRC to $11 an hour—and freeze members’ pensions through the end of 2010.

There is a growing sense that our union needs new leadership to rebuild Teamster Power.

That conviction doesn’t end with YRC or the freight industry.

Hundreds of thousands of Teamsters are fed up—including many local officers. The Hoffa camp has never been more discouraged or divided.

But anger alone won’t be enough to get rid of Hoffa. It will take organization.

That’s why TDU is launching 10,000 Teamsters to Dump Hoffa.

The campaign to elect new International Union leaders will begin next summer. We have one year to build the campaign army it will take to win.

It comes down to simple math. It will take just 175,000 votes to win the next IBT election. A campaign army of 10,000 Teamsters can make it happen.

The Hoffa road is at a dead end. It’s time for Teamster members to take the wheel and set a new course for our union. 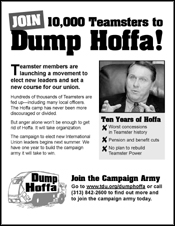 Click here to check out the Teamster election timeline and what it will take to win the election for top Teamster officers.

Click here to join the campaign army of Teamsters working together to elect new officers at the International Union.