“It’s Up to Us to Turn Our Union Around”

December 7, 2009: In a speech at the TDU Convention, Butch Lewis talked about what it will take to get our union on the right track. 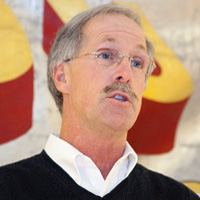 We all know times are tough. The country faces the worst recession any of us has seen. Members are angry and frustrated. Over the past year we’ve seen our wages cut by 15 percent. YRC is no longer paying towards our pension. Members are anxious to know what’s next. That’s not a great situation to be working under. And it’s not something we can live with over the long haul.

So what do we do? How can things be turned around? Hoffa talks about Teamster power and pride but those are just empty words coming from him. The membership isn’t experiencing any sense of power or pride. Real power and pride have to be earned—and that takes a tremendous amount of hard work and commitment.

Hoffa and many of our officers like to strut around and act big but they’re really just a bunch of blow hards and stiff suits. We’ve had ten years of their so-called leadership and I’m not sure if we can survive another two. We need change badly.

Start at the Grassroots

Now whether or not you voted for Obama, and we can discuss how that’s going over dinner or beers this evening, you have to recognize that he and his team organized a grassroots effort during the primaries that gave people a sense of movement and hope. People responded because they wanted change and they saw somebody giving direction.

We need to learn from that experience and bring it into the Teamsters. Regular folks can make a difference if they can organize a grassroots effort that makes sense.

A couple months back, I said to myself, if not TDU, who? And that’s the question and challenge I pose to other Teamsters. Who is going to help us turn this dire situation around? We need to challenge our brothers and sisters to get off the sidelines and into the game. TDU gives us the best odds for winning.

TDU has the track record of getting the information and the know-how out to Teamsters that want to make a difference. Many, many Teamsters read the website and count on TDU for what little information and perspective we can get. That knowledge is crucial as the basis for forging our campaign to change this union.

We need to take those readers and turn them into an army of thousands of Teamsters who are a galvanized force in our union. Those thousands can reach out to thousands more. We need to focus all the discontent out there into a positive movement to retake our union.

Hoffa Junior play acts at leadership. We’re serious about how necessary and important real leaders need to be. It starts with a commitment and then a plan. Our message to all those frustrated and angry Teamsters is, YOU and WE—the membership—are the leaders we’re looking for.

In these tough times, it’s up to us to make it happen in our workplaces and our locals. It’s now or never as far as I’m concerned and I’m heartened and gratified I’m in this fight with all of you.

“We need to challenge our brothers and sisters to get off the sidelines and into the game. TDU gives us the best odds for winning.”