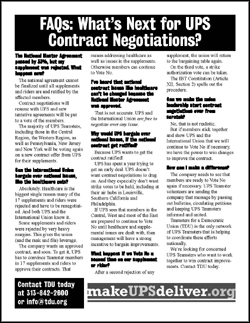 The National Master Agreement passed by 53%, but my supplement was rejected. What happens now?

The national agreement cannot be finalized until all supplements and riders are renegotiated and ratified by the affected members.

Contract negotiations will resume with UPS and new tentative agreements will be put to a vote of the members.

The majority of UPS Teamsters, including those in the Central Region, the Western Region, as well as Pennsylvania, New Jersey and New York will be voting again on a new contract offer from UPS for their supplements.

Can the International Union bargain over national issues, like the healthcare cuts?

Absolutely. Healthcare is the biggest single reason many of the 18 supplements and riders were rejected and have to be renegotiated. And both UPS and the International Union know it.

Some supplements and riders were rejected by very heavy margins. This gives the union (and the rank and file) leverage.

The company wants an approved contract and soon. To get it, UPS has to convince Teamster members in 18 supplements and riders to approve their contracts. That means addressing healthcare as well as issues in the supplements. Otherwise members can continue to Vote No.

I've heard that national contract issues like healthcare can't be changed because the National Master Agreement was approved.

That is not accurate. UPS and the International Union are free to negotiate over any issue.

Why would UPS bargain over national issues, if the national contract got ratified?

Because UPS wants to get the contract ratified!

UPS has spent a year trying to get an early deal. UPS doesn't want contract negotiations to drag on and they especially don't want strike votes to be held, including at their air hubs in Louisville, Southern California and Philadelphia.

If UPS sees that members in the Central, West and most of the East are prepared to continue to Vote No until healthcare and supplemental issues are dealt with, then management will have a strong incentive to bargain improvements.

What happens if we Vote No a second time on our supplement or rider?

After a second rejection of any supplement, the union will return to the bargaining table again.

On the third vote, a strike authorization vote can be taken.

The IBT Constitution (Article XII, Section 2) spells out the procedure.

Can we make the union leadership start contract negotiations over from scratch?

No, that is not realistic.

But if members stick together and show UPS and the International Union that we will continue to Vote No if necessary, we have the power to win changes to improve the contract.

How can I make a difference?

The company needs to see that members are ready to Vote No again if necessary. UPS Teamster volunteers are sending the company that message by passing out bulletins, circulating petitions and keeping UPS Teamsters informed and united.

Teamsters for a Democratic Union (TDU) is the only network of UPS Teamsters that is helping to coordinate these efforts nationally.

We're looking for concerned UPS Teamsters who want to work together to win contract improvements. Click here to let us know you want to be involved.