Fed Up at UPS

May 13, 2011: UPS is coming under fire for unfair production standards and the company’s blame-the-worker approach to safety. Some Teamsters are taking action.

Local 804 members rallied at UPS in Melville, Long Island this week to protest the company’s illegal firing of two stewards in retaliation for action taken by Local 804 to protect the safety of drivers and the public.

The safety showdown came to a head in Local 804 when a package driver who had worked more than 12 hours brought his load back to the building and told management he was too fatigued to work safely.

Management claimed the driver had resigned. When a Local 804 business agent brought members together, management accused the union of a “work stoppage” and fired the stewards.

Members have united in solidarity. They held a rally to protest the firings complete with an enormous inflatable corporate “fat cat” strangling a UPS worker.

The rally on Long Island was one in a series of demonstrations against production harassment by Local 804 members at UPS buildings across metro New York. 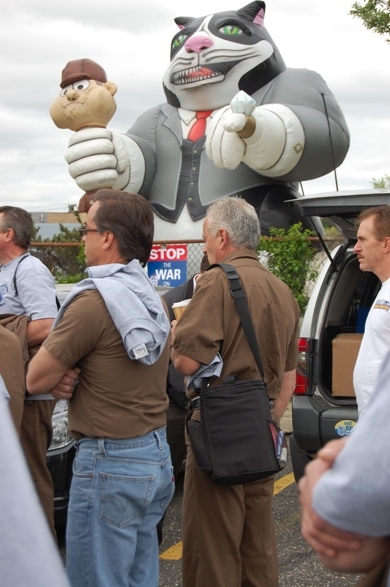 The UPS Fat Cat has been a fixture at the rallies and the media has provided sympathetic coverage to member’s concerns about safety and driver fatigue. For images and media clips, go to www.teamsterslocal804.org

Other Teamster locals are also taking action and getting into the media.

Boston Local 25 recently pulled out of UPS’s safety committees. Local 804 did the same in January.

In January, Teamster Package Division Director Ken Hall was quoted in Teamster UPSdate promising that “UPS management has agreed to review their conduct across the country and put an end to harassment due to unrealistic and unreasonable production standards.”

Three months later, Hall reversed his claim and called for a national day of action. Stickers saying “Unfair Production Harassment” were distributed to UPS locals. With only one week advance notice, participation was uneven.

“After years of outrageous violations, it’s good to see the IBT at least trying to do something,” said John Youngermann, a Local 688 UPS Teamster and a member of the TDU Steering Committee. “But it’s going to take a lot more than stickers to stop production harassment and unsafe working conditions at UPS.”