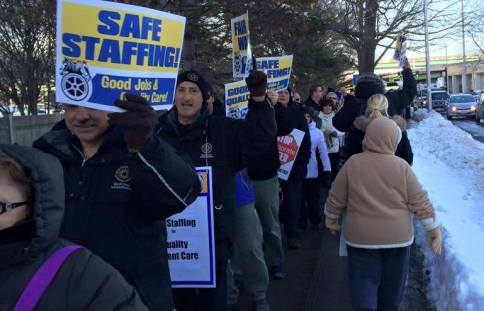 Now, Local 251 members at Rhode Island Hospital are standing up against corporate greed by building labor-community solidarity. Will you stand with them?

Lifespan is supposed to be a nonprofit but it paid its top executives more than $16 million in one year! In the meantime, the Hospital refuses to negotiate a fair contract for 2,200 Teamster members.

The Hospital has even rejected a contract proposal that "providing quality care to patients and their family is the top objective of the Hospital" and requiring management "to maintain sufficient staff and adequate supplies."

What kind of Hospital says no to quality care?

Rhode Island Hospital Teamsters are not just speaking for themselves. They are teaming up with the community to fight for a fair contract, good jobs, and quality patient care.

Pubic supporters launched an online petition to speak out to Lifespan. In just one day, more than 12,000 people have signed the petition and the numbers continue to grow.

For more info and photos of the picket line, check out www.facebook.com/goodjobsqualitycare