Hoffa-Hall Admit World is Round, Not Flat

June 27, 2013: Hoffa and Hall have issued a statement admitting that the UPS contract was rejected in many areas because of the changes in the health care plan. But UPS Teamsters will need to keep up the heat to win real health care improvements. 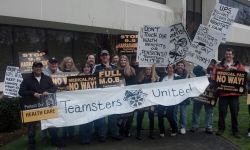 The IBT press release of June 26 states: "A provision in the contract that changes the health care plan for some UPS Teamsters led to the rejection of 17 local supplements and riders to the national agreement."

Actually 18 supplements and riders were rejected. But who's counting? The main point is that Hoffa and Hall got one message at least from the historic Vote No movement that rejected UPS supplements which cover 63% of all UPS Teamsters.

Now the question is, what will they do about it?

Ken Hall and UPS have been sent back to the bargaining table.

The danger is that they will only make token changes in the health care cuts and then try to push through the contract on a second vote.

Members need to stay strong, organized and prepared to organize an even bigger No Vote, if necessary, the second time around.

TDU is holding a national conference call of UPS Teamsters on Sun, June 30 to update members, answer questions and help build the Vote No movement. Click here to join the call.

Members in some areas are already distributing bulletins and petitions to tell the company and the IBT that they will Vote No until UPS gets the contract right.

TDU is looking for UPS Teamsters who want to get involved with the petition drive or other efforts to keep members informed and united.

The healthcare cuts are not the only problem with the contract. Louisville Local 89 is standing up for more 22.3 full time jobs, and so are many other Teamsters, including members at the big airport hubs in Southern California (Ontario) and Philadelphia.

The four-year progression is a ridiculous giveback to a company that made $4.5 billion—and eliminating it would be relatively cheap for the company.

In the Central Region, members want more than token improvements in their pension (the lowest in the country) and elimination of the loophole in 17i which lets the company fire Teamsters for "other serious offenses."

The historic rejection of 18 supplements gives the rank and file leverage to win contract improvements. But we've got our work cut out for us and a lot of organizing to do.

Click here to get the call in information for the national conference call of UPS Teamsters on Sunday, June 30.

UPS Teamsters across the country are working with TDU to win a better contract. Click here to let us know you want get involved with the petition drive or other efforts to keep members informed and united.

Click here to read FAQs on how contract negotiations work.

Click here for a local-by-local chart of all the contract votes.