Posted on June 12, 2014
June 13, 2014: The Hoffa-Hall administration wants to end your Right to Vote for Teamster President and other International officers. 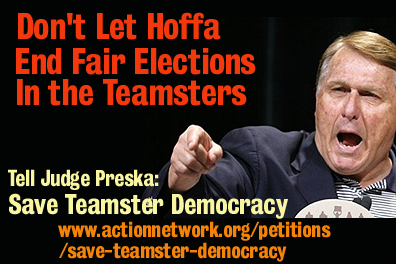 The IBT has made a submission to Judge Loretta Preska to end the 1989 Consent Order, a court-approved agreement signed by the IBT, which guarantees all Teamsters the right to vote for IBT officers, with an impartial election supervisor, and fair rules.
The Hoffa administration says they would still honor our right to vote. But their actions betray a different agenda.
Fair Elections Gutted
Hoffa already changed the IBT Constitution so that, without the Consent Order, the General Executive Board would write their own election rules and handpick their own election supervisor.
Blocking Opposition Candidates
Top Hoffa administration officials are on the record that they want to raise the requirement for candidates to get nominated from 5% of delegates to at least 10%. This would have eliminated every single election for the past 15 years.
Hoffa has tried to block opposition candidates from getting nominated in every election.
In the last election, the Hoffa administration was found guilty of offering bribes to union officials to try to get them not to run.
Do you really think Hoffa and Hall will let opposition candidates get on the ballot if they have the power to stop them?
Ignoring Majority Rule
Hoffa and Hall just imposed a contract after 9,000 UPS Teamsters in Louisville voted No by 94 percent. Do you really think they respect your right to vote?
Saving Teamster Democracy
Hoffa-Hall have less support than ever. It is no coincidence they are moving to end the consent order at this time.
Teamsters for a Democratic Union fought for and won our right to elect IBT officers.
Now, we are launching a new campaign to save fair, independently supervised elections and to make Teamster members' voices heard.
What is Teamster Democracy Worth to You?
The Hoffa administration claims that the Consent Order costs the Union too much money.
But the biggest ticket item in the Consent Order is Teamster elections. The bill for the election, including balloting, all election mailings, election protests, and all Election Supervisor costs, is $12 million.
That bill comes due once every five years. The total dues paid by Teamster members over the same five year period is $4 billion. A fair election costs far less than 1% of your dues, and less than Hoffa and Hall pay in multiple salaries to Teamster officals.
The only way to save this money is to eliminate contested International Union elections! And that’s just what Hoffa and Hall plan to do.
How They Used to Choose Officers
Before 1989, Teamsters didn't have the Right to Vote.
Instead, the Teamster General President, Secretary-Treasurer, and General Executive Board were chosen in the backrooms of the Teamster Convention.
Organized crime hand-picked Jackie Presser as head of the Teamsters in 1983.
His predecessor, Roy Williams, testified that he never made important decisions as Teamster president without taking into account what organized crime families wanted. Both of them were indicted for racketeering; Williams was convicted, Presser passed away before facing trial.
Under the old system, officers who went along with mob rule and givebacks moved up the ladder. Officers who objected were put on the sidelines.The Hoffa administration still rewards yes-men and punishes dissenters. Without elections, the situation would be a lot worse.
Winning the Right to Vote
Teamster members organized for years to win the right to vote—standing up to organized crime and top Teamster officials who didn’t want to face a membership vote.
TDU brought together members who wanted the union to fight for their jobs and their benefits.
We collected a hundred thousand signatures from members demanding the right to vote.
We won, and in 1991, Ron Carey, one of the first officers to stand up against concessions and corruption, became the first democratically elected president of our union.
Carey put dozens of mob-run locals in trusteeship, eliminated over 100 multiple salaries, and worked to mobilize members to overturn a decade of concessions—culminating in the 1997 UPS strike victory.
What You Can Do
TDU won the right to vote—and we’ll fight to keep it. Stand with Teamster members and help save Teamster democracy.
Sign the Open Letter to Judge Preska
If you’re not a member of TDU, join today.
news Hoffa Watch Teamster Voice 290 June-July 2014
Do you like this post?
Tweet
Get Advice Join TDU Donate