How to Recruit to TDU

How to Recruit to TDU

Most new members join TDU because another Teamster recruits them by urging them to join, nswering their questions and mailing in their membership form.

Different approaches work for different people at different times. Here are some basic ideas to keep in mind. You can make use of them, and add your own
methods too. 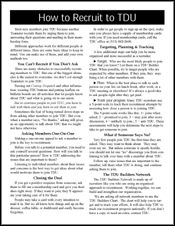 There are many obstacles to successfully recruiting members to TDU. But one of the biggest obstacles is the easiest to overcome–we don’t ask enough Teamsters to join TDU.

Passing out Teamster Voice and other information, wearing TDU buttons and putting leaflets on bulletin boards are all activities that let people know about TDU and what is going on in our union.

But to convince people to join TDU, you have to talk with them and you have to ask them to join.

Sometimes the fear of being turned down stops us from asking other members to join TDU. But even when a member says, “No thanks,” asking still gives us an opportunity to talk about TDU that we might not have otherwise.

Making a one-on-one appeal to ask a member to join is the key to recruitment.

Before you talk to a potential member, you need to ask yourself several questions. How will you talk to this particular person? How is TDU addressing the issues that are important to them?

Listening to individual members about their issues and concerns is the best way to get ideas about what would motivate them to join TDU.

If you get a positive response from someone, ask them to fill out a membership card and give you their dues right away. If they want to join, they’ll appreciate your taking care of it for them.

People may take a card with every intention to mail it in. But we all know how things end up on the dresser, coffee table, or dashboard and easily become
forgotten.

In order to get people to sign up on the spot, make sure you always have a supply of membership cards with you. If you need membership cards, call the TDU office at (313) 842-2600.

A few additional steps can help you be more organized and more successful as a recruiter.

The 5-point scale works like this: 1= joins when asked; 2 = promised to join; 3 = may join after more discussion; 4 = unlikely to join ; 5 = anti-TDU. These assessments will help you determine the next steps to take to get someone to join.

What if Someone Says No?

Very few people join TDU the first time they are asked. They may want to think about. They may even say no. But unless someone is openly hostile, you should not let one “no” discourage you from continuing to talk over time with a member about TDU.

Follow up, raise issues that are important to the member, tell them what TDU is doing, and continue asking them to join.

The TDU Builders Network is made up of recruiters like you who are using an organized approach to recruitment. Working together, we can build and strengthen our organization.

We are asking all network members to use the TDU Builders Chart. The chart will help you to target nd to track your efforts. It will also help TDU to track our recruitment progress nationally. If you don’t have a copy or need an extra, contact TDU.