Information Is Power! Local 804 Members Turn Out For Education Conference

The conference focused on the problems UPSers are facing at work and what members and our union can do about them. 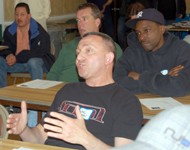 “This is exactly the kind of thing our local should be doing,” said feeder driver Neil O’Brien. “Sharing information, building unity and making plans to build union power. That’s what it’s all about.”

“Management is cracking down on drivers, riding guys. We talked about what drivers can do to protect themselves,” said shop steward Chris Sabatino.

In another workshop, inside employees talked about the epidemic of supervisors working and strategies that other Teamster locals are using to stop the violations and make UPS pay.

Another hot topic was the elimination of the full-time combo jobs—across the country and in Local 804. Members made plans to participate in a national petition drive to make UPS create all 20,000 full-time jobs that the membership is owed under the contract. 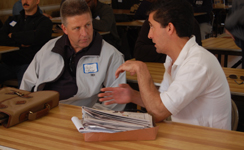 Building a Movement For Change

This year is an election year in Local 804. Teamsters at the Education Conference made it clear that the membership is ready for change.

Shop steward Tim Sylvester told the crowd, “804 Members United will be putting forward a leadership team that can lead this local, strengthen representation and unite members to defend our contracts and benefits.

“The slate will answer to a reform platform and will work hand in-hand with a rank-and-file network of members from every building and classification in the local,” Sylvester said.

That network has been building since the members voted down the last contract. 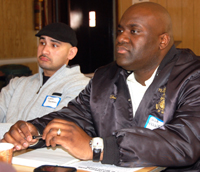 Local 804 has a proud history of being one of the strongest locals in our union, and the home of Ron Carey, the first democratically-elected Teamster president.

Local 804 Members United brought members together to vote down a concessionary UPS contract and save 25-and-out pensions for new employees.

“804 Members United is about more than a slate. We are about building a rank-and-file movement for a stronger union. And we want every member to be a part of it,” said Jim Reynolds.

Doug Corbett, a package steward from 43rd Street, was one of dozens of members who filled out volunteer forms at the Education Conference. “If you want change, you’ve got to get involved,” Corbett said.