February 11, 2009: Forty-three former workers at the Minneapolis Star Tribune will get their full severance payments, with an outcry from union members playing a significant role in the outcome. 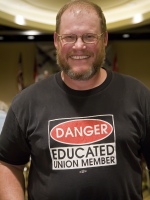 Story by Rick SatherThe former workers, who left the newspaper during the last year, had earlier been notified by the Star Tribune that their severance payments would be cut off.

The decision to pay the workers, who had been laid off or taken buy-outs, was made by a federal bankruptcy judge in New York. The judge had earlier ruled against paying the buyouts in-full.

The decision to pay the workers came after intense pressure by the unions and union employees who spoke out loudly when they learned they were not being paid. Some of the laid-off workers were owed thousands of dollars and had been unable to find work since leaving the newspaper.

The Star Tribune filed for bankruptcy in January. While the newspaper, largest in Minnesota, is making a profit, Avista Partners, the private equity firm that bought the paper two years ago, borrowed heavily to purchase it, and has been unable to make its debt payments.

A total of $436,478 of additional severance will be paid as a result of the court decision.

The Star Tribune told employees that it had always favored paying the severances in full, but the bankruptcy trustee and judge originally opposed doing so. Last week, the newspaper unions joined the company in urging the court to reconsider its decision and the court agreed to act.

“I’m glad we can pay our former employees as we promised,” stated Chris Harte, Star Tribune newspaper, who was quoted in his own newspaper.

However, it was the extraordinary outcry from union members, urging a wide-reaching campaign, that had as much to do with the decision by the company to press the matter and join with the unions in pressing the issue.

“We’re glad for our members and also we appreciate the company’s willingness to step up and push this issue in the face of the objections by the trustee,” said Graydon Royce, co-chairman of the Newspaper Guild, one of the unions whose members had been denied their full severance package. He was quoted in the Star Tribune. The 28 union and 15 non-union employees will get additional payments ranging from $3,000 to $52,400, according to the Star Tribune.

The company’s decision to support a full payment of the severances, while very welcome, does not indicate that the newspaper’s owners, Avista, have changed their stripes. They are still fully bent on ravaging the union contracts.

For example, the company handed the Teamster pressman’s union a proposal last month that every union person in the newspaper, not just pressmen, would find unacceptable.

Paperhandlers, one of the pressman units, would see their pay slashed to $18 an hour, a 36 percent wage cut. Manning provisions in the press room would revert to pre-World War II rules, allowing the company to send workers home who showed up for a shift, if the boss decided they did not need them. Currently, hard-won union contracts require the company to give a pressman member 24-hour notice.

Years ago, the pressmen gave up jobs and in exchange, the union won for its members an extra week of vacation. Those jobs are not coming back, but the company now wants to deny those members their extra vacation week. Other savage cuts were also proposed, including significant reductions in the wages of other pressmen workers and a huge increase in medical premiums.

Other unions are getting or can be expected to get proposals for major givebacks.

It will be important that there be a massive outcry to preserve the union contracts and decent wages and conditions. That will require mobilizing union members in mass action, and harnessing the Twin Cities labor movement and community, to rally in favor of good jobs and a quality newspaper. The unions, working together can create the climate that will demand a fair outcome in the bankruptcy proceedings.

This article is published on tdu.org, website of Teamsters for a Democratic Union. We are the rank and file movement to reform the Teamsters.

Rick Sather is a 30-year Teamster newspaper driver who retired in January from the Star Tribune and can be contacted at (651) 490-2957. He is a member of the Newspaper Union Rank-and-File Solidarity Committee, an independent rank-and-file group comprised of mailers, drivers, pressroom operators, custodians and journalists at the Star Tribune who meet weekly. It encourages participation by union retirees and is committed to building union solidarity.