May 15, 2009: Step right up to the “Nest Egg Toss” game! On April 23 on the front lawn of the Ontario legislature, workers could toss an egg representing their “nest egg” at painted pictures of nests. The eggs splatted on the plywood and ran down, just like auto workers’ hopes for a decent retirement. 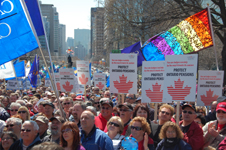 About 13,000 people, mostly retired Canadian Auto Workers members, gathered in front of the legislature to tell Premier Dalton McGuinty that they are concerned about their pensions and demand stronger pension protections from government and corporations.

Buses filled University Avenue as far as the eye could see, full of retirees from Windsor, Oshawa, St. Catharines, and many points in between. They had been stunned when McGuinty announced that the Ontario Pension Benefits Guarantee Fund could not handle one of the Big 3 automakers going bankrupt. The Fund is supposed to guarantee a minimum amount of a retiree’s pension in case of bankruptcy.

Hugh Davis, a retiree from CAW Local 88 who has Parkinson’s disease, was warned that the walking at the rally might be rough. “I’m determined to go,” said Davis. “My health care benefits are everything.” Although the most immediate threat was to the auto workers, they were joined by a large delegation from the Ontario Public Service Employees Union. The crowd on the legislature lawn parted, and the OPSEU members filed into the center of the protest with their flags flying high amid a roar of applause. Private and public sector unions were standing side by side, flags waving in the wind.

CAW President Ken Lewenza decried the unfairness of reducing retired workers to a “cost,” speaking of the retiree pensions and health benefits that employers call “legacy costs.” Retirees were workers who fought for the rights that we have today, Lewenza said, workers who made the Big 3 billions of dollars, workers with real needs and bills to pay.

Right now the pension crisis is a gigantic concern for auto workers but the sentiment was clear among all the unions. If the largest private sector union in Canada could be threatened with losing pensions, then it could happen to any retiree. The global financial crisis and recession has called into question the viability of many Canadian pension plans.

The rally had another important focus: the unfair and sad fact that less than half of all Canadian workers get any sort of pension from their employers at all.

The message was clear: Don’t even think about touching our pensions!