July 16, 2008: Ever since the Baltimore Local 355 fund cut the pension accrual rate was cut to zero, members have been asking for answers.

Now the fund is telling them it won’t answer their questions. 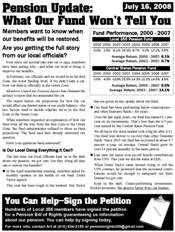 Download a bulletin you can post and distribute to other Teamsters.In February, Local 355 President Denis Taylor said the fund would be in the Red Zone, the worst funding level, if he didn’t cut the accrual rate to zero.

Now the fund is officially in the Green Zone. But how it got there has never been explained.

Rank-and-file members in Local 355 have obtained the actuary’s report that recommended the cut.

The report leaves out projections for how the cut would affect the fund’s funding status or credit balance—the two factors used to decide whether a fund is in the Red Zone or the Green Zone.

When members requested an explanation of how the fund went all the way from the Red Zone to the Green Zone, the fund administrator refused to show their projections. The fund said they already answered members’ question.

“Our fund is saying they’ve already given us all the information. But there’s nothing in their report that shows how the cut really affected our fund,” said Ron Reinhardt, a member at the Baltimore UPS building.

“I still have questions—and I want answers.”

Download the actuary’s report and the letter denying more information to Local 355 members.

Is Local 355 Doing Everything It Can?

Members are asking if local officials are doing everything they can to restore their benefits:

Updates. At the April membership meeting, members asked for monthly updates on the health of our fund. Taylor agreed.

This year has been rough in the markets. But Taylor has not given members any update about their fund.

Performance. The Local 355 has been performing below expectations—and other Teamster funds—for years.

Over the last eight years, our fund has earned 6.1 percent on its investments. That’s less than the 6.5 percent earned by the Central States Pension Fund.

After 9/11, the fund was slower to recover than other Teamster funds. Since 2003 the Local 355 fund has recovered at about 9.7 percent a year, on average. Central States grew by over 14 percent annually in the same period.

New Contributions. Last year our union won record benefit contributions from UPS. This year we did the same at DHL.

Our union said the UPS contributions would be enough to protect our benefits. Instead members got cuts.

A Pension Bill of Rights

Members in Local 355 have launched a campaign to win a Pension Bill of Rights to give members access to information about their fund—and to make sure members have a say when there are cuts.

Hundreds of Local 355 members have already signed a petition in support of the Pension Bill of Rights. Click here to download the petition that you ask other Teamsters to sign.

What do you think our union should be doing to restore the benefits? Click here to send in your questions or comments.