Local 804 members got an early start on building Teamster Power in 2008—by defeating concessions and pension cuts in December 2007.

Members held a series of rank-and-file meetings and launched a Vote No campaign—after UPS and Local 804 negotiators cut a concessionary contract deal that included pension cuts.

Members voted the contract down by three to one and UPS was forced to take the concessions off the table—including its demand to eliminate 25 & Out pensions for new Teamsters.

Members could have gone back to business as usual then, but they didn’t. Instead, they formed a rank-and-file committee called Local 804 Members United.

“We wanted to get to the root of the problem, one of which is the lack of information members were getting from our union,” said Jim Reynolds, an alternate steward and a founding member of Local 804 Members United.

Local 804 Members United launched a petition drive to change the Local 804 bylaws to require officers to keep members informed during bargaining and to report on the pension and health funds at every membership meeting.

They collected over 2,000 signatures on a petition to change the Local 804 bylaws and voted through the changes by a more than 90 percent.

An investigation by the group uncovered that the Local 804 Health Fund had lost $18 million in assets in just four years—and that Local 804 officials had diverted millions of dollars in contributions from the Health Fund to the Pension Fund without ever telling the members.

Using their rights under the Pension Protection Act, members have forced UPS and Local 804 to turn over financial documents that they had mismanaged the Pension Fund’s assets for years—putting members’ benefits at risk.

“The last couple of years have been a real wake-up call as far as our pension is concerned,” said Bill Reynolds, a package car driver on Long Island and one of the members who pressed the fund to release the documents. 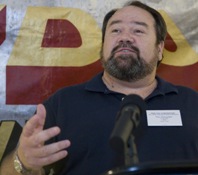 “We all have a responsibility to leave our union stronger than it was when we got here. That’s what Local 804 Members United is all about,” said Tim Sylvester, a 29-year Teamster and Local 804 shop steward.

“Brown can’t move a package in New York City without a Local 804 Teamster: that gives us power. Our local used to use it to win top contracts and pensions.”

“Local 804 members used to feel that power. We want to bring the pride and the power back,” Sylvester said.

Working together, the members of Local 804 Members United are on the road to doing just that.