June 1, 2012: Local 814 Teamsters at Sotheby’s Auction House have ratified a contract and are returning to work after a hard-fought 10-month lockout.

Sotheby’s is a world-wide auction house for the super-rich. The 42 Teamsters employed there handle some of the most valuable art pieces in the world.

Sotheby’s recently sold a painting for $120 million, but they locked out Teamster members for trying to negotiate job security language to protect union jobs that pay a living wage.

The lockout became a symbol of the attack on union jobs and runaway corporate greed.  The public rallied to the Teamster cause including members of other unions, artists, students, and Occupy Wall Street.

Teamster supporters engaged in civil disobedience and creative protests as part of a far-reaching corporate campaign.

In a turning point, Sotheby’s dumped the anti-union law firm Jackson-Lewis. Yesterday, workers ratified a contract that returns them to work.

Local 814 members won modest wage increases, protected their benefits, and language that strengthens their seniority rights in terms of job assignments and overtime.

On the issue of securing union jobs, the lockout ended in a stalemate. Local 814 protected their work week guarantees but was not able to win language that would bring temporary workers into the union.

“We didn’t achieve all of our goals. But I’m proud of the way we united not just Teamsters, but all kinds of people who are concerned about what’s happening to working people in this country,” said Sotheby’s Teamster Julian Tysh. 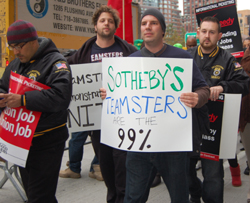 “We struck a chord, we built alliances. The lockout may be over but the bigger issues are still there and the struggle for justice continues,” Tysh said.

“I want to thank all those who supported us in this effort from the Joint Council to Occupy Wall Street,” Local 814 President Jason Ide said in a Teamster statement.

“This lockout was a misguided attempt by the 1 percent to crush the hopes and lives of middle class workers. That was never going to happen on our watch.”