Waste Management, the world’s largest waste corporation, is trying to shift the cost of healthcare onto employees and force Teamsters into inferior company medical plans. Other waste companies are following suit.

Members of Seattle Local 174 are showing how Teamsters can fight back with solidarity and strategic contract campaigns. As Convoy goes to press, 600 sanitation Teamsters have reached tentative agreements with two companies that will lower their out-of-pocket healthcare expenses by 90 percent.

“The rising cost of healthcare has been killing us,” said Troy Armes, a Teamster at Waste Management. “Under the tentative agreement, we’ll go from paying $274 a month to just $30 a month for family coverage.”

The tentative agreements include new language that protects workers from excessive forced overtime and provides double-time pay for excessive overtime. 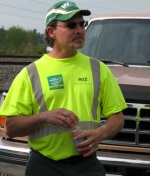 They provide enough money that members’ health care costs will be capped at $30 a month for the life of the agreement and also provide for significant wage and pension increases. Local 174 Teamsters currently make $24.45 an hour, before the contract raises.

“Sanitation Teamsters work hard under difficult conditions. They deserve good, affordable healthcare and the right to quality time with their families at the end of the workday,” said Secretary-Treasurer Dan Scott. “Those were our key issues and we mounted a campaign to win on them.”

Members leveraged these improvements by mounting a strategic contract campaign that began six months before the contract expired and by building solidarity, both within the Teamster ranks and with the public.

Members from both Allied and Waste held joint meetings to build unity around their priority demands.

They reached out to fellow Teamsters who were fighting healthcare concessions at Waste Management. Striking sanitation Teamsters from Washington D.C. and New York City spoke at a rally in Seattle.

Local 174 members promised to respect the picket lines if they were extended from the East Coast. Members at Waste Management wore “Extend the Respect” stickers to work and held parking lot meetings to send management a message.

As the contract expiration approached, political and religious leaders rallied with Local 174 Teamsters to support their demands.

Solidarity at the Strike Deadline

With a strike looming, management at Allied Waste offered members an agreement that would keep them in a top-of-the-line Teamster plan. Waste Management continued to drag its heels.

Local 174 held strike preparation meetings and made it clear to Waste Management that members would walk if the company didn’t match Allied’s offer.

The parties met one final time on Easter Sunday—the day before the strike deadline. Waste Management not only matched Allied Waste’s offer, they added more money to it.

Local 174 members had made a pact that the contracts at the two companies had to be equal. Members’ tough stand at Allied had helped the workers at Waste Management win a better deal. Now it was time for Allied Waste to up their offer to avert a strike.

Solidarity ruled the day. Minutes before a mass meeting, Allied added the extra money to their offer.

Members will vote on the tentative agreements in the coming weeks. But first, all members will have a week to review a complete copy of the proposed contracts.