September 28, 2010: They used to make $8 to $10 an hour with no benefits. Now after a five-week strike, they’re celebrating big raises and union benefits. 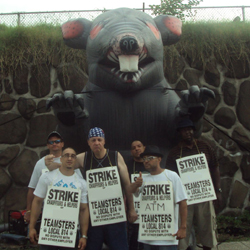 Strikers followed scab trucks with mobile pickets and showed up at job sites with a giant inflatable rat. Building managers were not amused.Workers at ATM Enterprises had no union and were making $8 to $10 an hour with no benefits.

Now they’re Teamsters and celebrating big raises and union benefits—thanks to a five-week strike, a giant rat, a committed crew of Teamsters, and a joint organizing drive by New York locals 814 and 805.

The fight started when Local 814 discovered that commercial movers at TOPS, a Local 814 shop, were working side-by-side with nonunion workers making poverty wages.

Management claimed the nonunion workers were working for an entirely different company—ATM Enterprises. They just happened to work out of the same building and had all the same customers.

The workers at ATM came together, voted to join the union, and demanded better pay and health benefits. The company said no deal, so the workers dropped their dollies and picked up picket signs.

“If we had let these nonunion conditions keep spreading, eventually it would have brought all of us down,” said Keith Temple, a Teamster at TOPS who went on strike for a new contract at the same time as the ATM workers hit the streets.

Strikers reached out to customers and told them about the disruption in the company’s business. They followed scab trucks with mobile pickets and showed up at job sites with a giant inflatable rat.

Building managers on Wall Street and in New York’s financial district were not amused.

“We stopped enough jobs that the boss started losing money,” Temple said. “It was a lot of fun chasing trucks. I hope I never have to do it again. But if someone else needs help, we’re ready.”