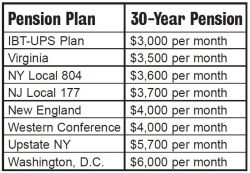 May 22, 2012: Teamsters in the IBT-UPS plan get the lowest pensions of any UPSers in the country.

The next contract is our chance to win the higher pensions we deserve.

The cost of living is going up. But pensions for UPS Teamsters in the IBT-UPS plan are falling behind.

The IBT-UPS Pension Plan was established under the new contract when UPS pulled out of the Central States Pension Fund.

The new plan covers more UPS Teamsters than any other pension fund—48,000 full-time UPS Teamsters in the Central and Southern regions and the Carolinas.

It also delivers the worst pension benefits of any plan covering full-time UPSers—with benefits of $3,000/month for 30-and-out.

This is not a bad pension and affected UPSers have more retirement security than freight Teamsters and others in the Central States Fund.

But the fact remains that 48,000 full-timers are getting second class pensions compared to full-time UPSers across the country who do the same work we do but get to retire on much more.

All UPSers work under the same national contract. The 48,000 UPSers in the IBT-UPS plan should not have to retire on $500 to $2,000 less a month than other UPS Teamsters.

Pensions under the IBT-UPS plan cost the company just $25 a day, compared to approximately $70 per day for every other Teamster pension plan. At these cut rates, no wonder Teamsters in this plan are falling behind.

UPS makes billions in profits off Teamster members' hard work. It's time to make UPS deliver the pensions we deserve.