December 7, 2009: After years of sell-out contracts and benefit cuts, members of New York Local 814 have voted for a new direction and a reform slate in their local union election. 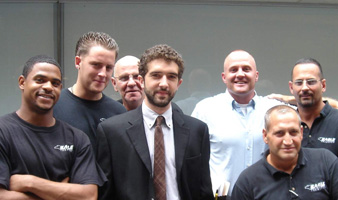 Members voted 72 percent to elect the 814 New Leadership Slate, headed by Jason Ide (center) and Richie Johnson (third from right).Members elected Jason Ide and the New Directions Slate by a whopping 72 percent in big turnout among the local’s 1,000 members. The new team will take office on January 1.They inherit huge problems and major challenges.

“We’ve got new generals, but every war is won by the soldiers. We’ve got to build a fighting, rank-and-file army if we want to win,” said Walter Taylor, a member of the TDU International Steering Committee and a Local 814 member.