February 26, 2010: Commercial movers in New York are mobilizing to end decades of contract givebacks and save their pensions and healthcare. 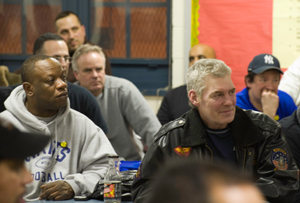 Over 150 commercial movers in Local 814 turned out on Feb. 9 to prepare for bargaining. Givebacks in recent contracts gutted members' pay and benefits and divided the membership into tiers.New York Local 814 moves New York—literally. The local represents the commercial movers who work for some of the deepest pockets in the city: Fortune 500 companies, Wall Street banks and the U.N.

But you’d never know it by their recent contracts. Givebacks have gutted members’ pay and benefits and divided the membership into tiers of higher and lower-paid workers.

The New York Moving and Storage contract expires on April 30. Local 814 is mobilizing to win a contract that reverses the trends that have undermined good union jobs and benefits in the industry.

Under the current contract, moving companies don’t have to pay any contributions for casuals. But they’re supposed to hire at least one industry worker for every casual. That’s called the “one-to-one ratio.”

For years, the employers violated the ratio and shorted the benefit funds, with disastrous results for the members. The Local 814 pension fund could go into the Red Zone at the end of March, and the health fund needs increased contributions to get back on its feet.

On Feb. 9, over 150 movers turned out to launch the local’s new contract campaign.

At their meeting, members and the new leaders set out a platform for winning a good contract:

“The runaway abuse of casuals is killing us,” said Andy Diclemente, a mover at Globe Storage and Moving. “I’m going around and telling the members that we need to fight for contributions for all movers.”

Members are already turning up the heat on employers who violate the contract.

In January, 25 members met and formed the Local 814 Enforcement Committee.

Now the committee is out on the streets, checking jobs, signing up new members, and enforcing the one-to-one ratio.

The union discovered that Clancy-Cullen Moving and Storage had been using a hidden team of nonunion workers for years. Now the company owes over $800,000 to the benefit funds, and they’ve had to start using Local 814 members.

The committee is bringing new members into the union, getting more work for industry workers, and making employers pay more into members’ pensions and healthcare.

“We know we’re not going to solve all our problems in one contract,” said Diclemente. “But we’re determined to fight for improvements that move us in the right direction.”

Moving in a New Direction

“The runaway abuse of casuals is killing us. I’m going around and telling the members that we need to fight for contributions for all movers.

“We know we’re not going to solve all our problems in one contract.

But we’re determined to fight for improvements that move us in the right direction.”