January 12, 2010: Teamster activists in Chicago Local 743 have been battling to free their 11,000 member local from mob and old guard control for many years. Now the top Chicago officials have escalated the fight, by removing the elected president and secretary treasurer from office on trumped up charges.

Local 743 members are saying “We Won’t Go Back,” after elected president Richard Berg and secretary treasurer Gina Alvarez were removed from office yesterday by the leadership of Joint Council 25. They intend to move the struggle forward, as they have over the past years.

For decades, Local 743 took care of its officers while members paid the price. That changed in 2007, when the 11,000 members of Local 743 voted Berg, Alvarez and their New Leadership slate into office.

On Jan. 11, Joint Council 25 officials suspended Berg and Alvarez from membership and removed them from their elected positions in the local on charges that they violated union procedures.

When he took office, Richard Berg cut his salary by $70,000 and reduced bloated salaries and staff.

Other officers, like VP Larry Davis, went along with the New Leadership platform when they thought it was just a campaign promise. But once they were in office, they demanded higher salaries and defended union reps who didn’t do their jobs.

“For years officials treated Local 743 like a piggy-bank,” said Melanie Cloghessy, a member of Local 743 at the University of Chicago. “We won’t go back to those dark days of corruption. The New Leadership team will keep fighting for a union that fights for us.”

Members Say “We Won’t Go Back!”

In 2004, Local 743 officials stole the election when it was clear that Berg was going to win. Joint Council 25 said the election was clean and upheld the results.

The Department of Labor investigated that election and found that it was rigged. Former president Richard Lopez is headed to jail for stealing it.

The leadership of Joint Council 25 had no problem when mobsters, drug dealers and criminals ran Local 743. They never found fault with two local presidents, who then were removed by the IRB for their dealings with the mob. They didn’t have any problem with Bob Walston, headed to jail for running a drug operation out of the union hall, and for election fraud against the New Leadership reformers. They were fine with Richard Lopez, also headed to jail.

Now they want to remove Berg and Alvarez from office, on a trumped up charge of making a $20,000 settlement with a fired employee, to avoid litigation.

Each time the old guard has moved against reformers, they thought they killed reform. Each time, the reform movement has grown stronger. Local 743 members are determined to keep making history.

“The officials who are making this power grab are going to learn that we’ll fight back against their double-dealing just like we stood up to the criminal activities of the past,” said Cloghessy.

Click here to read the flyer from the 743 Leadership Team.

Click here to read the press release from the 743 New Leadership Team.

Click here to read a news report from the Chicago Sun-Times. 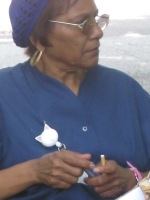 “We’re not going to let the new group of officials bargain contracts behind our backs.”