December 1, 2014: UPS CEO cashed in 40,000 shares of company stock two days before Thanksgiving for $4.3 million. Starting pay for UPS part-timers, in several areas, has fallen behind the minimum wage. 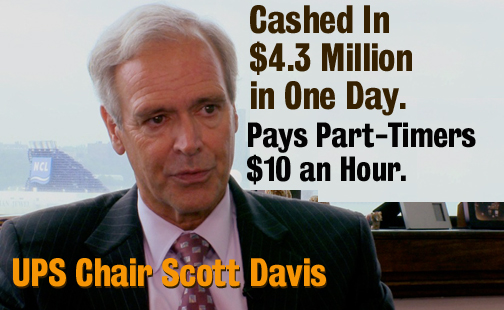 CEOs make more than Teamsters. We get that. But this is obscene, especially when many UPS part-timers are making poverty wages. Starting pay for UPS part-timers is frozen at just $10 an hour until 2018.

Legislation has been introduced to raise the federal minimum wage to higher than that: $10.10 an hour.

In several areas, the minimum wage has already surpassed starting pay under the UPS contract negotiated by Ken Hall.

Hawaii and Maryland voted to phase in hikes to the minimum wage to $10.10 an hour.

Seattle will phase in a new minimum wage of $15 an hour. Businesses with more than 500 workers must meet that level within three years. That includes the UPS hub.

San Francisco will also raise the minimum wage to $15 an hour over the same period. A UPS hub will be covered there too.

UPS part-timers at the hub in Richmond, California will make $12.30 starting in 2017 thanks to a minimum wage hike there with a COLA after that.

It’s time to End Part-Time Poverty at UPS. That starts with building a movement to elect new International Union leadership in 2016.