April 2, 2010: The head of Puerto Rico Local 901 has been banned from the union. Members are demanding a real clean-up and a new election.

Members rallied at the union hall and tried to present a petition to the Executive Board. Local 901 officials locked the doors and armed security guards blocked members from entering their own union hall.

A local television story called the move a “coup d’etat in the union.” If that sounds extreme, consider the extreme circumstances in Local 901.

Germán Vázquez was removed from his position as secretary-treasurer after an International Union panel found him guilty of taking more than $72,000 in unauthorized salary increases. But the Local 901 officials who did nothing to stop Vázquez’s unauthorized pay hikes kept their positions and installed Alexis Rodriguez as the new secretary-treasurer.

Vázquez held a separate competing press conference where he claimed that the Local 901 Executive Board had approved his salary hikes.

The Department of Labor is already suing Local 901 for election violations, charging that the local ran the 2008 vote to illegally favor the incumbents. And the National Labor Relations Board has charged local officials with retaliating against members for supporting the reform candidates for union office.

“When they removed Germán, they didn’t remove the corruption from our union,” Jose Budet told the media. “The corruption is inside our union with [the officials]. They represent themselves, their pockets; and the employers of this country. They don’t represent the Teamsters. The Teamsters are here in the street demanding elections.”

“A new election should be held to return our union to the members,” said TDU member Mara Quiara. “The future of Local 901 is at stake.” 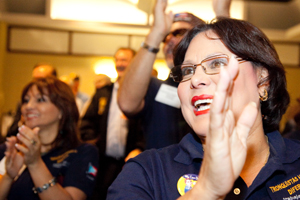 “Last year nine members came from Puerto Rico to the convention. It’s great to come together with so many members excited to change our union.

“The workshops at the convention are the best in our union. We came back to Puerto Rico and shared what we learned. We’re bringing even more members this year to Chicago.”