November 2, 2012: Chicago Teachers strike leader Karen Lewis headlined a TDU Convention that brought together Teamsters from across the country for a weekend of education and union-power building. 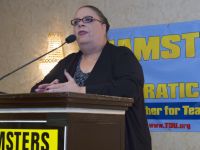 In her address, Lewis, the President of the Chicago Teachers Union, told a riveted audience how she went from being the member of a small union reform group (the Committee of Rank-and-File Educators) to leading the biggest and most successful strike victory that the labor movement has seen in years.

"When you own your contract, your process, your democracy, you change the rules and win."

The Vice President of the New York State Nurses Association, Judy Sheridan-Gonzalez, told members that TDU had helped inspire her and other nurses to build a successful movement to reform their union of 35,000 nurses.

It was all part of TDU's 37th annual convention, which focused on the challenge of rebuilding Teamster power in tough economic times.

UPS Teamsters held a meeting on contract negotiations as did UPS Freight and Freight Teamsters. Teamsters from other industries met also, and workshops were held on winning better local contracts.

Members elected a new Steering Committee of 18 to lead TDU for the coming year.

Following Lewis's keynote address, inspired members donated $46,000 to TDU and the reform movement. Members who were not able to attend the TDU Convention are sending in donations with the goal of bringing the fundraising total over $60,000.

"The workshops and information at the TDU Convention are amazing. And I was inspired to meet so many Teamsters who share the same vision of what Teamster members need today and where our union needs to go.