The Right to Vote and You

February 8, 2012: Top Teamster officials want to end your Right to Vote for Teamster President and other International officers.

What does that have to do with your job and your benefits? More than you may think.

Find out why—and what you can do to stop the attack on your rights.

Members get to vote for Teamster General President, General Secretary-Treasurer, and the General Executive Board every five years. And there is an impartial election supervisor, with a staff, who oversees the whole election, under a set of fair rules.

Teamster members organized for years to win the Right to Vote—standing up to organized crime and top Teamster officials who didn’t want to face a membership vote.

To get on the ballot, candidates need to get the votes of five percent of the delegates to the Teamster Convention.

Raising that limit to ten percent or more would be the easiest way to stop most Teamster elections. That change would have prevented every election against Hoffa since 2001.

It’s hard enough holding Hoffa and other top officials accountable as it is.

Imagine how much harder it would be if they didn’t have to face an election every five years.

That’s exactly what they want—to go back to the days when the Teamster officers were chosen by each other, instead of by the members. 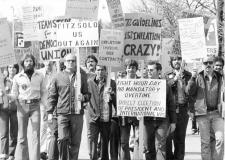 Before the Right to Vote

Before 1989, Teamsters didn’t have the Right to Vote.

During the 1980s, Teamster officials failed to organize while the nonunion competition exploded in freight, gave UPS the green light to introduce substandard pay for part-timers, and wasted dues on outrageous salaries and a union jet fleet.

Our union is still paying for those mistakes today. 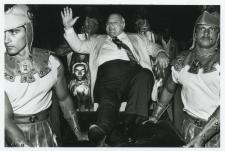 How They Used to Choose Officers

Before the Right to Vote, the Teamster General President, Secretary-Treasurer, and General Executive Board were chosen in the backrooms of the Teamster Convention.

Organized crime hand-picked Jackie Presser as head of the Teamsters in 1983. His predecessor, Roy Williams, testified that he never made important decisions as Teamster president without taking into account what organized crime families wanted. Both of them were indicted for racketeering; Williams was convicted, Presser passed away before facing trial.

Under the old system, officers who went along with mob rule and givebacks moved up the ladder. Officers who objected were sidelined.

The Hoffa administration still rewards yes-men and punishes dissenters—but without elections, the situation would be a lot worse.

TDU brought together members who wanted the union to fight for their jobs and their benefits.

We collected a hundred thousand signatures from members demanding the Right to Vote.

We won, and in 1991, Ron Carey, one of the first officers to stand up against concessions and corruption, became the first democratically elected president of our union.

Carey put dozens of mob-run locals in trusteeship, eliminated over 100 multiple salaries,  and worked to mobilize members to overturn a decade of concessions—
culminating in the 1997 UPS strike victory. 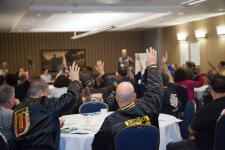 TDU won the Right to Vote—and we’ll fight to keep it. We have plans in place to do just that.

And we’ll also keep working to hold our officials accountable over our contracts and our benefits.

We’re only as strong as our members. If you’re not a member of TDU, join today.