November 25, 2009: Local 805 President and TDU leader Sandy Pope was honored this week as a New York City local hero that makes a difference.

To celebrate Thanksgiving, Tom Robbins, the labor columnist for the Village Voice in New York City, published a Thanksgiving Honor Roll, lauding “the oft-overlooked people in a city of celebrity.”

Pope’s entry, “Not Your Average Teamster leader” is reprinted here. 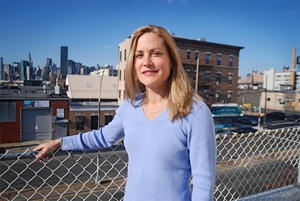 Sandy Pope is not your average Teamsters leader. A woman heading a blue-collar union local, she also holds a martial arts black belt. But her most important trait is a dedication to union democracy and organizing.

A former truck driver from Cleveland, Pope became the head of Local 805 in Queens in 1999, one of many Teamsters locals that had long been little more than playthings for the mob and its favored employers.

She ended lingering corrupt practices and had the 1,200 members—mostly warehouse, supply, and cafeteria workers—elect their own stewards. She won better contracts and also did what most union leaders are too fearful or too sluggish to attempt: She organized, winning elections at several vending shops.

She also targeted Fresh Direct, the big gourmet food company that boasts of community dedication but has resisted demands for higher pay for its workforce. The first Teamsters push was derailed when immigration agents raided the company's food-prep plant.