June 25, 2012: TDU member Mike Spruill interviewed about how and why he became a TDU member and a Teamster. 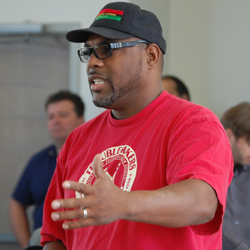 They never let me forget that nothing comes for free, that we have to stand up and defend our rights if we want to be treated with respect.

I became a Teamster when I was 25 as a carhauler in Baltimore and have been a Teamster ever since. I started driving a truck at Kraft Nabisco in 1989.

How did you join TDU?

A driver in Connecticut had the TDU newspaper and told me to check it out and get involved. At the time I was having a lot of issues and was looking for information on our rights and advice on how to handle different situations.

TDU published these model local union by-laws and I posted them on our bulletin board. When they were torn down, I knew I was on to something.

TDU also helped us win MLK day as a paid holiday. For years, Kraft gave the drivers the choice of working on MLK Day or taking the day off without pay. Then they just laid everyone off that day. We passed around a petition saying Kraft should honor Dr. King’s legacy of labor and civil rights and either recognize the day as paid holiday or return to the old practice of allowing members to work or take it off.

What are the challenges you’ve faced on the job and in the union?

It’s been tough. Racism still divides us. I found a noose in our break area once. It’s a day-to-day battle to stand up to this kind of thing, racist remarks and unfair treatment.

We need our unions to do a better job educating and defending our members. That doesn’t happen enough.

We need to stick together to protect ourselves and the integrity of the union. We can’t let them turn back the clock and take away all we’ve won over the years.

What would you say to other Black Teamsters who want to be leaders in our union?

If you want to defend your rights, you can’t be worried about looking politically correct. Doing the right thing might mean going against what seems popular. Don’t worry about being buddies with management or your officials, or you might be paralyzed when it comes time to stand up for something.

Ask others for help, use what works, and keep learning.