January 10, 2009: Teamsters at the Star Tribune are joining forces with other union members to oppose cuts as the paper’s owner threatens bankruptcy. 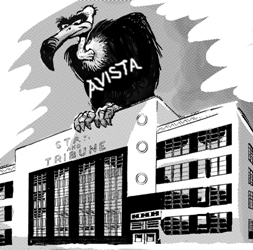 Unions at the Minneapolis Star Tribune have been given the royal brush-off by the company.

The company is refusing to negotiate seriously with the unions, setting the stage for Avista, the newspaper owner, to file for bankruptcy.

Demands Avista made were so draconian, it was a virtual certainty the union bargaining committees would be obligated to reject them. The newspaper is making profits, but Avista says it cannot take in enough revenue to make payments on money it borrowed to buy the paper in 2007.

The proposals are so outrageous, members feel they stand a better chance bargaining after bankruptcy is filed.

Bargaining committee members from several unions indicated it appeared the company was not serious about reaching an agreement with the unions, but was going through the motions in an attempt to persuade a bankruptcy judge that it tried to reach an agreement.

“It shows the company sees its workers as more of a liability than an asset,” said Doug Rzeszutek, a 30-year pressman. “I’d like to see every union come together to support union and nonunion employees and reach out to the general public for support.”

Said Greg Kujawa, a 30-year Teamster driver, “What they are asking for is unconscionable. Avista does not care about the worker, the worker’s family or the community the family lives in. They are making profits of nine or ten percent from what I understand. They want the workers to pick up the tab on their bad investment decisions.”

“We all realize the company is in trouble, but they don’t give us a reason to vote for this thing,” said Bradley Hassel, a 36-year pressmen, referring to Avista’s demands.

“I think it is outrageous that the company is asking that I give up a third of my vacation time and that my medical insurance would be severely cut,” added Steve Pietrizak, a 42-year pressman.

“I’d like to encourage retirees from all the unions to step up and help their brothers and sisters who are still working,” said recent pressman retiree Dan Ganley. “The company is trying to destabilize the unions with unilateral, unnecessary demands.”

“Not only are all the union bargaining committees hanging together and not caving in to the company’s concessions, the members are also standing strong against the concessions,” said Sather. Some 400 “no concessions” buttons and stickers have been distributed.

Members are ready if the company files for bankruptcy. “We believe there is a lot of community support out there, a lot of labor support in the Twin Cities and we’ll need to harness it, working with all the unions at the paper to stand up for our rights,” said Chris Serres, a Guild member and reporter at the Star Tribune.