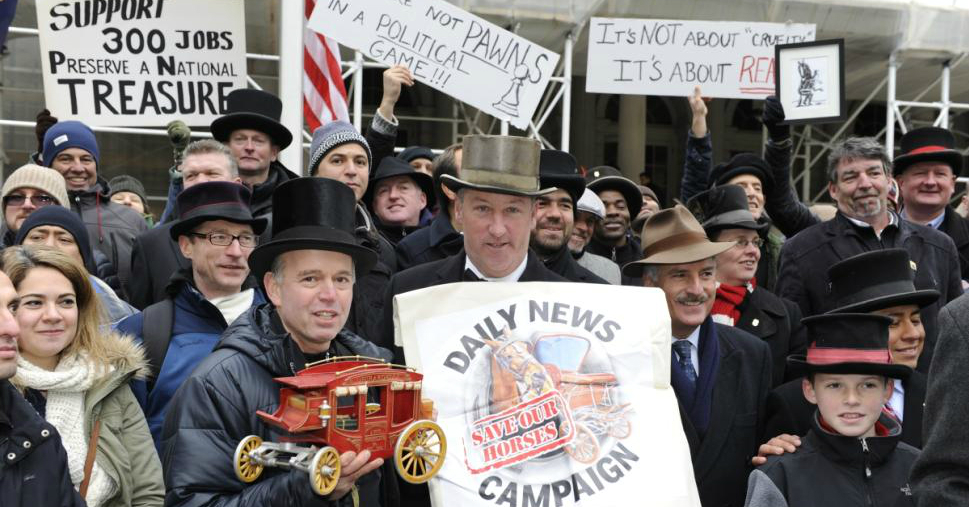 Mayor Bill de Blasio has introduced legislation to ban New York City’s iconic Central Park horse carriages.
Three hundred Teamster horse carriage driver jobs, members of Local 553, are at stake.
The animal advocacy group New Yorkers for Clean, Livable and Safe Streets claims the iconic industry is inhumane. Opponents of the ban say that putting Teamsters in the street is inhumane and that we need more good union jobs, not fewer. The Teamster solidarity has taken root.
Forty thousand New Yorkers signed the NY Daily News “Save Our Horses” petition to city politicians. Unions have rallied to support the Teamsters at a City Hall rally to save jobs. Actors Danny Glover and Liam Neeson have given public support.
Teamsters in New York have been hit hard. Hundreds of school bus and dairy Teamster jobs were destroyed with no action by the Joint Council. Instead, their shrunken locals were merged into Teamster Local 553, which is headed by Joint Council 16 Secretary-Treasurer Demos Demopoulos.
The Teamster fight to stop the Horse Carriage Ban is the kind of broad, public campaign—uniting Teamsters with other union members, allies, and the community—our union should mount wherever Teamster jobs are threatened.
Sign up for email updates at www.tdu.org and like us on facebook.
news Labor Movement NY-NJ TDU Teamster Voice 292 January-February2015
Do you like this post?
Tweet
Get Advice Join TDU Donate