Teamster Ranks Fought Back in 2014

December 23, 2014: Teamster members fought back in 2014, taking on concessions, organizing to save their benefits, defending members' right to vote, and more.  Members can look to these campaigns with hope as we organize to rebuild Teamster power in 2015. 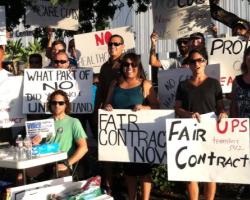 UPS Teamsters across the country united to reject a historic 18 local supplements and riders in the largest anti-concessions campaign in the U.S. UPS Freight Teamsters Voted No too. While Hoffa and Hall ultimately forced through these contracts, the Vote No movement succeeded in winning some improvements in Teamcare and laid the foundation for acampaign to win elect Teamster leadership in 2016.

How do you win a good contract in a concessionary environement? Vermont bus drivers showed how it's done, uniting with riders, other unions, community and student groups to face down their own union leaders and win an 18-day strike against the Chittenden Country Transit Authority.

TDU won the right to vote—and we’ll fight to keep it. When Hoffa moved to cancel IBT elections in 2014, members coordinated a national petition drive and collected 12,000 signatures demanding to keep the right to vote for union officers. We’ll be there to safeguard members rights throughout the election process—and we’ll be backing a strong coalition team to win new leadership in the 2016 union elections.

Members Unite to Take Back Our Union

Members proved they’re willing to organize and stand up against concessions at UPS and in freight—the same can’t be said for Hoffa and Hall. So, starting in the summer of 2014, members began to organize and hold events in New Jersey, Philadelphia, Pittsburgh, Dayton and Louisville to unite members, stewards and officers who are committed to winning new leadership in the 2016 International election.

Drivers at FedEx in Charlotte, Philadelphia, and South Brunswick, NJ and at Conway in Miami, Los Angeles, and Laredo, TX  voted to join the Teamsters. Is this the start of movement to organize in freight and trucking? We hope so! It’s certainly a good first step, and it should spread. Local unions and freight workers are stepping up to take action. The IBT needs to get behind this movement and help drive it to victory. 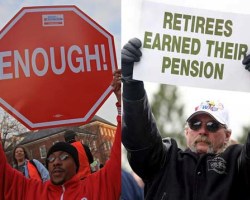 Fighting for Our Pensions

The growing movement to bring new vision and leadership to the Teamsters is broader than TDU. It seeks to unite all members, stewards, officers and Teamster leaders who are committed to fighting concessions and to building a strong coalition to win in the 2016 International Election. Fred Zuckerman spoke at the TDU Convention in November which hosted the first national meet-up of the new movement.