March 2, 2009: Local 743 Teamsters are standing together to fight layoffs at the University of Chicago Medical Center. 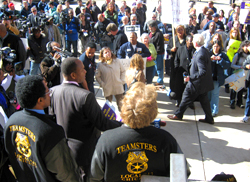 Teamster Local 743 represents much of the non-nursing staff at the University of Chicago Medical Center. Management recently announced a major layoff of over 450 employees.

“I have no job, six kids and a $1,500 dollar rent payment,” said Sherri Taylor Kennedy, a Local 743 member. Until the layoff, she was a secretary serving two pediatric surgeons at the UC Medical Center.

Local 743 mobilized members with a picket and rally to protest the layoffs. They reached out to the community and University of Chicago students for support.

Members across the hospital emphasized the importance of patient care. “You can’t deliver the quality of service to all aspects of the hospital, to the labs, administrative, cleanliness of the facility with less people,” commented Leonard Charley, a Local 743 steward. “You can’t do the same quality job at the hospital with a much lower level of staffing.”

Melanie Cloghessy, a clerical employee at the University of Chicago continued, “The University hasn’t suffered losses, they’re projecting losses.  Even so, they’re planning more research and more construction. They can do the same for the 450 people they just laid off. It’s not rocket science. They can all be returned to work if management applies good long-term planning and shows ordinary respect for the people who work here.”

Cloghessy concluded, “The University is the largest employer on the south side of Chicago. They don’t have a right to impoverish the community just to change their bottom line.”