Read remembrances of Teamster President Ron Carey by Teamster members who knew and worked with him. 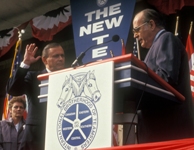 Ken PaffKen Paff, TDU National Organizer
I first met Ron Carey in the early 1980s. We always met at a diner in Queens, New York, where he would order his signature tuna sandwich. We discussed how reform of the Teamsters could be possible, and we were checking each other out, too.

Ken CroweKen Crowe, author of Collision and reporter for Newsday
On the day Ron Carey was elected president of the Teamsters in 1991, I rode with him in a cab interviewing him all the way from downtown Washington to the airport. After we were dropped off, we realized we were in the wrong terminal. Carey picked up his two heavy bags--refusing my offer to carry one of them—and we ran (literally) to the right terminal.

That scene sums up Carey: self-effacing and ambitious.

Sandy Pope, Local 805 President
When I became a Teamster in 1978, our union was on the defensive. A terrible economy, deregulation and anti-union politicians had the entire labor movement on its heels.

What a breath of fresh air Ron Carey was and what an inspiration he was in those days—winning strikes at UPS as the president of Local 804 and negotiating the best pensions in the country.

Tim SylvesterTim Sylvester, Local 804 Shop Steward
May God Bless Ron Carey and his family at this at this tragic time of his passing.

He was taken too early, not just with his death, but he was taken from us ten years ago by a system that didn’t allow anyone as good as he was to remain in power in our union.

Diana KilmuryDiana Kilmury
Former International Vice President
The passing of former Teamster president Ron Carey has left me with mixed emotions. Sadness, of course, that the charismatic leader who headed the greatest revolution in Teamster history has left us. But also frustration at how it ended.

Willie HardyWillie Hardy, Local 667
I would like for the world to know about a true labor leader and a true friend of mine, brother Ron Carey.

I worked with Ron in the Government Affairs Dept of the IBT. I was the second African American to work in that department.

He treated me as a man and with respect.

Tim BubanTim Buban, Former Local 200 President
A Ron Carey comes along once in a generation.

His legacy will always be the UPS strike and the massive victory it brought to all of us in organized labor.

But to those of us who knew him we remember a kind, compassionate man who was sensitive to others feelings.  Read more.

Alex AdamsAlex Adams, Former Local 407 President
Ron Carey was the real thing. He inspired me, and got me active in our union. I miss him, and the union misses him.

I got in touch with Ron Carey through TDU. I was distributing his campaign literature and Convoy Dispatch all over Ohio and East—I was a road driver then at Yellow Freight. When I got a chance to meet him, after a TDU Convention, my support took on new meaning. I’m proud to say I became a friend of his.

Click here to send your personal remembrance of Ron Carey. He touched thousands of us and we will not be able to post all of our remembrances, but we know that he is in the hearts and minds of many in our union.