Turning Up the Heat to Defend a Steward

May 27, 2009: When UPS management tried to get rid of an assertive Oklahoma steward, they didn’t know what they were in for.

Members and local officials mobilized to put the member back to work. And a few days later the center manager was out of a job.

March 30 was a wet, stormy day in Oklahoma. Doug Hisle, a package car driver out of the Lawton building, was delivering his route on a dirt road.

When he was pulling out of one stop, Hisle lightly tapped a customer’s mailbox. He didn’t feel the impact, and he didn’t see the scratch because his car was caked in mud.

The customer didn’t report the incident until six hours later—even though she was standing in her yard when Hisle made his delivery.

Hisle reported the scratch the next day, as soon as he saw it.

When management called in Doug for questioning, he explained that he didn’t know about the scratch until the next day. But they wouldn’t listen to his story. Management terminated Hisle for failing to report an accident—even though they had no evidence that Hisle knew about the incident before he reported it.

“There’s no doubt in my mind why they went after Doug,” said Karl Howeth, another steward in the Lawton building. “He’s an assertive steward. He isn’t afraid to confront management when other drivers’ jobs are on the line.”

UPS management in Lawton is pushing production, and Doug has helped protect drivers: “Management tries to intimidate drivers who file for 9.5,” Howeth said. “But working with Doug we’ve been able to get most of our drivers on the 9.5 opt-in list.”

Rank-and-file members and the local union prepared a two-pronged plan to get Hisle’s job back. And they took management totally off-guard.

In Lawton, several concerned drivers talked to management and said that Doug was being treated unfairly.

Members networked with stewards at other buildings, and soon members were raising the issue in Enid, Norman, and Oklahoma City.

Hisle worked with the officers of the local to prepare his case for a local-level meeting with management. “The facts of the case showed that management had made a hasty decision and there was no just cause for my termination,” Hisle said.

“My local officers really went to bat for me,” Hisle said. It worked and Hisle got his job back.

Just a few days later, his center manager came in to work, put in his letter of resignation, and walked out the door.

“Sometimes you have to take the fight to UPS management,” Hisle said.

Are you helping a member out who is facing unfair discipline? Go to tdu.org/justcause to learn more about the seven tests of just cause. 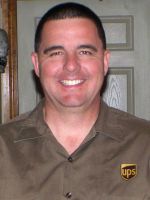 Doug HisleTake the Fight to UPS

“The facts of the case showed that management had made a hasty decision and there was no just cause for my termination.

“My local officers really went to bat for me. Sometimes you have to take the fight to UPS management.”
Doug Hisle, Steward
Local 886, Lawton, Oklahoma