December 15, 2014: The lame duck Congress has attached pension cut legislation to the end-of-year spending bill that will pave the way for the worst pension cuts in Teamster history.

Leave it to UPS to find a way to make billions off this disaster. 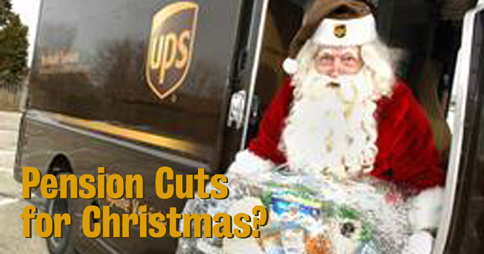 UPS lobbyists fought for and won a special interest loophole that shifts $2 billion in the company’s pension responsibilities on to the backs of Teamster retirees in the Central States. These retirees will now face even bigger pension cuts as a result.

UPS is the one and only company that benefits from the loophole on pages 81-82. Its purpose is to ensure that the Central States Pension Fund will not reduce the pensions of UPS workers who retired after January 1, 2008.

Not reducing pensions. Isn’t that a good thing? Of course! But UPS retirees in the Central States are already protected from having their pensions reduced.

In the case of any pension cuts by Central States, Article 34, Section 1 of the UPS master agreement, requires the company to make up any lost pension benefits.

UPS’s special interest loophole means the company won’t have to make up for any pension cuts. The loophole doesn’t save UPS retirees a dime, but UPS will save a fortune.

Teamster retirees and their widows will face $2 billion more in pension cuts so UPS can get out of paying the obligations it agreed to in the contact.

What can Brown do for you? Certainly, not this.