UPS Still ‘In Love With Hoffa’

July 15, 2011: UPS management is so confident of their cozy relationship with IBT President James Hoffa that they are crowing about it to industry executives. 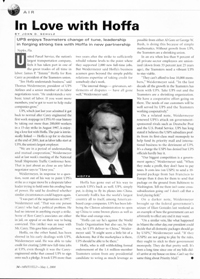 UPS CEO Scott Davis told a gathering of CEOs and financial analysts on June 1 that, “The relationship with the Teamsters is better than it’s ever been before.” (Stanford C. Bernstein 27th Strategic Decisions Conference, 06/01/2011).

“That is just about as close as any labor negotiator says to ‘I love you,’” Traffic World magazine reported after similar remarks in 2000 by a top UPS negotiator.

In 2000, Traffic World declared that, “UPS is enjoying a love fest with Hoffa.” Today, another industry publication, DC Velocity, reports that CEO Scott Davis is “happy with the way things are” and would like to negotiate the next contract with Hoffa.

Davis has good reason to be happy. The CEO made $10.7 million last year, a 72 percent hike over his total compensation for 2009. Davis’s pay has quadrupled since 2007.

Over the same period, the Hoffa administration has given Davis record contract givebacks and has turned a blind eye while management walks all over the contract.

Production harassment and 9.5 violations are at an all-time-high. Management has eliminated many of the 22.3 full-time jobs we went on strike to win in 1997.

We can’t afford to have management’s sweetheart negotiating our next contract.

Time to End the Love Affair

“When UPS management is happy with your union president, you know you’ve got a problem. The election for General President this fall is our chance to end UPS’s love affair with Hoffa for good.

“Sandy Pope is the tough negotiator we need. She’ll mobilize our union and stand up to the company.