Using 'Just Cause' to Win Grievances

Understanding 'Just Cause' can help protect Teamsters from discipline or discharge.

In most Teamster contracts, employers are prohibited from firing or suspending an employee without "just cause."

But "just cause" is rarely spelled out in union contracts. What does it mean and how should you use it to win disciplinary grievances?

This is the subject of an important new book, entitled Just Cause: A Union Guide to Winning Disciplinary Cases, by labor attorney and educator Robert Schwartz.

Click here to order a copy from TDU's online store.

The Seven Basic Principles of Just Cause

Attorney Robert Schwartz studied 20,000 arbitration cases to see how arbitrators use just cause to decide termination and suspension cases.

His book outlines seven basic principles of just cause.

Holding management to these seven principles can help you present a strong defense and win disciplinary grievances at all levels of the grievance procedure.

You still have to gather the facts, prepare witnesses and documentation, but you have a framework that guides you to your strongest arguments.

An employer may not discipline an employee for violating rule of standard whose nature and penalties have not been made known.

Are employees aware of the rule and the consequences of violating it? Sometimes the answer is obvious (theft, drinking on the job). But if the violation falls in a grey area that was never clearly spelled out by the employer, this may be a source of a just cause defense.

An employee may not be penalized for violating a rule or standard that the employer has failed to enforce for a prolonged period.

Even if a rule is on the books, the employer can lose its right to terminate an employee if the rule has not been enforced over a long period.

In such cases of lax enforcement, management cannot suddenly reverse its course and crack down without first warning employees that the rule is in effect and violations will be punished.

An employer must conduct an interview or a hearing before issuing discipline, must take action promptly, and must list charges precisely. Once assessed, discipline may not be increased.

Members' right to union representation and due process must be respected in the investigation. If the employer disciplines first and holds an investigative interview or hearing later, they have likely violated just cause.

Charges must be proven by substantial and credible evidence.

In a disciplinary grievance meeting, the steward or union rep should make the employer prove their case first. Management should be made to present the facts and be asked to present all of its evidence before the union presents its defense.

If management does not have substantial and credible evidence that an offense occurred, then they haven't met the "just cause" standard for discipline.

Unless a valid distinction justifies a higher penalty, an employer may not assess a considerably stronger punishment against one employee than it assessed against another known to have committed the same or a substantially similar offense.

If other employees who commit the same offense have been treated differently, this may constitute "disparate treatment" which violates this test.

The union has the right to do an information request and obtain employer records for all employees who have been disciplined for the same offense in a given time period.

When responding to misconduct that is short of egregious, the employer must issue at least one level of discipline that allows the employee an opportunity to improve.

Except in extreme cases, discipline should be progressive. The goal should be to get an employee to understand and follow the rules, not to run them out the door.

Discipline must be proportional to the gravity of the offense, taking into account any mitigating, extenuating, or aggravating circumstances.

Does the punishment fit the crime? An employee's past record can also be relevant. A bad past record cannot be used to prove guilt of a new violation. But a good past record and other mitigating circumstances can balance the scales and lessen a penalty.

Just Cause: A Union Guide To Winning Disciplinary Cases 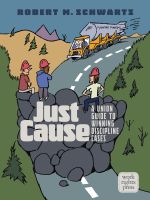 Just Cause: A Union Guide To Winning Disciplinary Cases should be on the shelf of every union rep and steward.

Seven Principles vs. the Seven Tests of Just Cause

Many unions have historically used the "Seven Tests of Just Cause" to counter management's arguments that they had just cause to discipline an employee.

These seven tests were originally put forward by arbitrator Carroll Daugherty. He was trying to set a common standard for interpreting just cause.

Attorney Robert Schwartz studied 20,000 arbitration cases to research how arbitrators actually use just cause to rule on termination and suspension cases.

Schwartz, is the author of popular guides for union members like the Legal Rights of Union Stewards and the FMLA Handbook.

His new book goes through each one of the "Seven Basic Principles of Just Cause" in detail, citing cases and reviewing the strengths and limitations of each rule.

Many Teamsters do not have a grievance procedure that ends in arbitration. Instead, they go to grievance panels made up of employers and union officials. This method is still a good guide for reps and stewards to the strongest arguments for their case.

The International Union should require union officials who sit on panels to apply clear standards, like these seven principles, when ruling on disciplinary grievances.