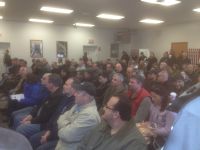 Members were there to vote on amendments to the Local 251 bylaws that would give members the right to elect their shop stewards and contract negotiating committees and to vote on increases in officer salaries.

These democratic changes were put forward by the rank-and-file movement 251 United Action. Local 251 officials opposed the changes and campaigned against them vigorously. 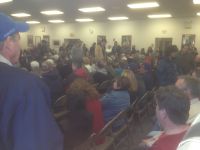 More than 800 Teamsters turned out to vote—more than twice as many members as can fit in the union hall. Members in the packed hall voted and then the hall was emptied and refilled to capacity for a second vote.

When the ballots were counted, a majority of members had voted in favor of each and every reform.

"This is an amazing victory for Local 251 members and for Teamster democracy," said Nick Williams, a Teamster at Rhode Island Hospital. "Our union meetings used to have 50 or 60 people sometimes. To see 800 Teamsters get involved is tremendous. The more that members are involved in the Local, the stronger our Union will be." 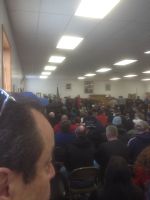 The Local 251 Bylaws will not be changed because a two-thirds majority is required to amend the bylaws. But 251 United Action members say they've made history.

"Members won a victory before the ballots were even counted," said Paul Santos, a Rhode Island Hospital Teamster. "We used to feel like we had no voice in our union. We've proven the majority of members want change."

Although the bylaws were not officially amended, the Local 251 Executive Board have the power to implement the reforms and respect the will of the majority of the members. (Members aren't holding their breath while they wait for that to happen though!)

"The members have spoken and they'll have a chance to speak again in the election for Local 251 officers this fall," said Matt Taibi, a UPS Teamster. "And we won't need a two-thirds majority to win the election."

At the insistence of 251 United Action, the bylaws vote was conducted by secret ballot and both sides had the right to observe every step of the voting process.

"There's a lot of intimidation and scare tactics in our union, but those days are coming to an end," said Matt Maini, a UPS Teamster. "Members see that we can speak up and we can make the union respect our democratic rights. The days of 'Sit down and shut up' or 'You're lucky you have a job' are over."