June 23, 2008: Since 1976, Teamsters for a Democratic Union has brought together members who want to build a stronger union—by getting organized and sticking to our principles. 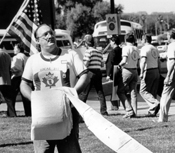 At the 1986 Teamster Convention, TDU members delivered over 100,000 signatures demanding the Right to Vote. Back then members had no vote for our union’s top officers.

TDU won the Right to Vote for General President in 1989, and majority rule on our contracts in 1987. And we’re there as a watchdog today, making sure all Teamsters can cast an informed vote.

In the 1990s, TDU led the movement that won 25-and-out benefits, and today TDU is the leading force defending our pensions from attacks by employers and union officials who won’t stand up to them.

TDU members built a movement that improved unfair “reemployment” rules in the Central States. We helped reverse pension cuts and preserve 25-and-out in Local 804. Our pension workshops train members to protect their pensions.

Rebuilding Teamster Power starts with educating members and getting them involved.

TDU has been doing that for over 30 years at our annual Convention, with workshops, and our books and Convoy.

With those tools, working Teamsters are winning strong contracts, putting teeth back into the grievance procedure, and taking back their locals.

“I joined TDU because the Teamsters I respected the most were already members. The more I learned about it, the more I realized that this is the direction I want to take our union in. I’m proud of what we’ve accomplished.

“I’ve been a member now for a few years, and the advice of other TDU members has helped me deal with difficult situations—and get results. We need more of that in our union. I hope you’ll join TDU today.”